...started with a disappointing opening to the 2011 Anima Mundi concert programme. Doubly so, since I'd really been looking forward to it: Mozart Requiem, performed in the Duomo ought to have been sublime...but for some bizarre reason Christopher Hogwood, conducting, took the whole thing at a  jog-trot pace that robbed it entirely of its majesty, and reduced it to little better than opera bouffe. Maybe he had a bus to catch, or a hot date after the show...but whatever the reason, Hogwood unquestionably made a pig's ear.

Tuesday's concert in the Camposanto, on the other hand, made up for everything. Alice Sarah Ott playing Mozart (perhaps not her strongpoint), Beethoven (excellent!) and Liszt (beyond description, wonderful). A stunningly good performance. Quite, quite superb. Not a bad setting, as well, with Ms Ott's backdrop being a motley collection of Roman sarcophagi and ottocento funerary statues, all set against Benozzo Gozzoli's increasingly well-restored frescoes. 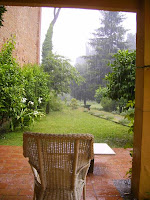 On Sunday, we had rain. We actually had rain. And no half-hearted shower, either, but a good old Pisan downpour, which saw the courtyard flooded within minutes, as we rushed around and had the usual drama with rolled bath towels stuffed against the bottom of the dining room doors against a possible influx into the house (Canute-like in practice, if the water actually does rise that high...which, thankfully,  it normally doesn't) . The garden liked it; the watering department (i.e me) liked it, a lot...and then we went back to summer again, which was also ok.

Monday was the Technical Dept's birthday. The Belfortes came for dinner (and to stay for Ms Ott's show on Tuesday evening): Langoustine Tart; grilled magrets de canard; and a three-chocolate parfait, to finish. The rain had sufficiently cooled things down that we actually ate indoors, for the first time in three months, and there was a sense that summer is finally showing signs of winding down. Although, Tuesday was hot once more, and we sweltered over an afternoon game of croquet, where the TD ended well ahead of the field, followed by the Belfortes, who went the wrong way round the course at one point, and (not unusually) matters ended in confused disagreement about the rules, before we broke for tea.

On Wednesday, we departed en masse to Tarquinia, to look at etruscan tombs. Glorious things - and many, many, many of them. Lunch on the deserted beach at Tarquinia Lido beforehand was perfect, as we consumed delicious fried morsels and pasta marinara (of various kinds), basked in late-summer sun, and decided that although the second bottle was probably inadvisable, we would anyway.

Early evening found us standing on the ruins of the Queen's Temple, on the ancient site of the etruscan city, with a view in all directions of the soft profile of the Lazio hills under the lengthening  shadows cast by the evening sun; just us, and from somewhere way-off in  the distance the sound of sheep bells, and not another person anywhere to be seen.

Dinner (and overnight) was an hour away in Sutri, in preparation for a morning of Roman ruins on the following day. The town has charm, and the restaurant (Locanda di Saturno) boasted a fine medieval courtyard; the kitchen was competent, but the menu a little too mannered for my taste: chicken, with peach and almonds; rabbit with port and orange...all a bit too complicated and trying too hard. Possibly I'm getting old, but increasingly my preference is for traditional dishes, cooked well.

Sutri: a medieval cathedral, where a rather appalling late interior gives no hint of the beautiful early medieval crypt concealed beneath; an impressive roman amphitheatre, carved directly from bedrock, and surrounded by a confusion of tomb-caves that made up the roman necropolis; and a splendid (if dank and gloomy) early-christian cave-church, in a space which had previously been a temple to Mithras.

We completed the trip by heading back north, into Tuscany, just in time for a late lunch at Il Fornacino in Guazzino, just off the Sinalunga exit on the Autostrada da Sole. Well worth the drive - everything was excellent:crostini alla toscana;  tagliolini con tartufo; quails cooked with olives and white wine, and an extremely good rosso di Montepulciano (Boscarelli, Prugnolo 2009). Following which, in time-honoured fashion, we wended our way home, tired-but-happy.

Prawns 'Newberg' (cooked in butter, with diced shallot, then sauced in vermouth, cream, and paprika)

Bramble Mousse
Posted by Pomiane at 09:30

What a wonderful few days! I envy you your rain. Still bone dry here and I'm watering our young trees again. Love the croquet photo. Tod refuses to bring ours out until our lawn is perfect. Which I fear will be never. :)

The rain was a one-off...it's been hot and dry ever since, too hot for gardening during the day, we've been dining al fresco every evening, and - yes - turning the hose on the base of the young trees every two or three days. And as for the croquet 'lawn'...the plan is to be ploughing up, re-seeding and rolling by the end of this month.