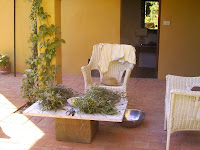 Time for the lavender to be dead-headed...a task I normally put off as long as I can. Watching the stalks lengthen and the flowers come into bloom marks the onset of summer, and when they're over it's difficult not to think of the season passing and the approach of September. Except that in fact autumn here can be the best part of the year - so, what's not to like? - and the newly-shorn lavender bushes suddenly make the garden look surprisingly tidy....the causeway lined with them, looking like two rows of those hedgehog-shaped shoe cleaners that decorate the back doors of English country houses. And now, from a bowl on the hall table, the scent of lavender wafts gently through the house, as the flower heads dry.

Harvesting continues apace. Having finished the apricots several weeks ago, we picked 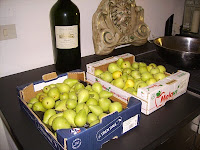 a boxful of newly-ripened plums to take with us to Belforte, where we weekended recently - and then returned to find the plum tree suspiciously empty of all other fruit. Either extremely thorough birds had been at work, or else the gardener from the seminary next door had nipped in and helped himself (as I'd previously found him doing with the smaller plum tree, which fruits a month earlier). NB. one of the tasks for August: install a new and lockable gate between us and the seminary grounds!
We aren't short of fruit, though, as the large pear tree has just surrendered serious quantities of small and succulent pears, and the apple trees in the old orchard are now just about ripe for picking. After that, we have the figs, quince and grapes to look forward to...not to mention the late-fruiting peach trees, which fruit through until the end of September, I think. 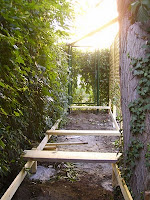 ard at work, building the walkway for the new entrance we're installing at the south-west corner of the garden, and the pergola which will link it to the end of the barn. Much to the relief of the climbing roses which were planted just before Christmas, and have been increasingly gasping to have something decent to climb up, and looking deeply frustrated by their pro-tem bamboo frames. 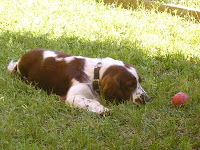 And the four-footeds are hard at work, too, generally getting in the way of either building or gardening work...or else concentrating deeply on ball control!

Sformatini of Fennel, with Gorgonzola sauce.