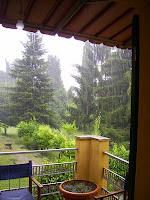 A centimetre of rain, we were promised by Tempo Italia. And, after five weeks without a drop, it seemed a welcome change - even the possibility of an evening off from garden-watering duties, which is a two hour task every rainless day throughout summer.
Dutifully, the clouds gathered, and by mid morning, the rain began. Stuck indoors, we decided to go across town to pick up the new lights for the library in Via Fucini, and allow the rain to wash the accumulated summer dust off the car in the process - and found ourselves crawling through Pisa in monsoon conditions, barely able to see through the windscreen, despite frenetic activity from the windscreen wipers. 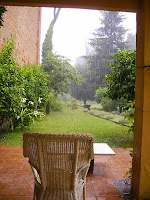 By early afternoon, it had diminished to a fine drizzle, and then to nothing at all, and was even replaced by watery sunlight. We'd had our centimetre, and then some...and Gian Carlo reappeared to continue with building, and I got on with (yet more) weeding.
Around five o'clock, heralded by increasingly threatening growls of thunder, it began again. 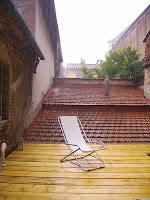 And it got heavier... 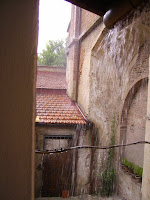 And the courtyard behind the house - into which the gutters drain from the roof of the church, and from the roof of this house and (because they don't clean their gutters properly) from the roof of the Teatro Lux next door - began to fill up. We've seen it before...whenever there's an intense downpour, the sudden volume of water is too much for the drains, and at a certain point the water gushes up out of the drain, rather than disappearing efficiently down it. 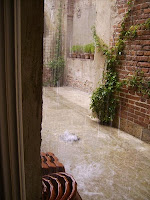 And, because some ecclesiastical architect at some point, in an excess of enthusiasm for poured concrete, had decided to line the floor of the courtyard in the stuff, in these circumstances the courtyard acts as a waterproof tank, with no opportunity for water to drain away. 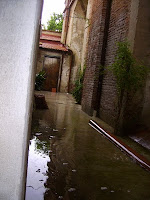 Fortunately, we'd already witnessed this happening before we installed the french windows from the Pranzo to the courtyard, and so had left about a foot of clearance beneath the windows, to avoid water simply pouring into the house the next time the courtyard unexpectedly turned itself into a swimming pool - and since the house is probably six or eight inches lower than the level of the courtyard, then pour in it most definitely would! 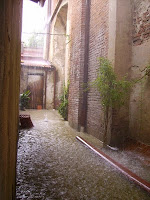 The thunder boomed overhead, the rain lashed down, and our confidence ebbed, as we watched the level of water in the yard inexorably rise. Three times, the storm moved away, and the water level diminished - although, the third time, before the rain lightened, the water had already been lapping at the sills to the doors, and we armed ourselves with mountains of rolled towels to try and stem the imminent influx. Long before that, I'd stopped taking pictures of it as an 'interesting event', and had started contemplating moving bits of furniture, and unplugging possibly vulnerable bits of electrical kit.

During dinner, the storm began again, and we could hardly hear ourselves speak for the din of the thunder. Once again, the water level rose, and - this time by the light of the candles from the dining table - we watched as it gushed ever closer to danger point. Again, it diminished, and drained away once more.

It was as I finished a glass of grappa that it started again in earnest. And, this time, it just went on and on....and on.....and on. We lined the outer sills with rolled towels, as the water got to that level, and we closed the french windows and put more towels on the inside sills. And more towels again. And still the water rose, until it was a couple of inches above the sills, and the towels got wetter and wetter as the water seeped under the doors from outside. Large damp patches appeared on the walls beneath the windows, and small pools began to gather on the Pranzo floor.

At which point, the rain eased off. And by twenty minutes later the water level was back down to safety level, and we decided to call it a day. There was nothing further we could do, anyway, even if it had continued to rain, since we'd used up all available towels by that point...it was a sauve qui peut moment, and so we did, and went to bed. Fortunately, to the accompaniment of rain-free silence.

And we awoke this morning to sunshine, and clear skies, and a wonderful freshness to the air.

According to the online news, though, there had been more than 4,000 thunderbolts over the course of six hours (whoever was counting them?) and at Marina da Pisa there was even a mini tornado. Which is possibly the most exciting thing that's ever happened at Marina da Pisa.

Over morning coffee, we discussed the advisability of sandbags (much to be said for them).

I think, perhaps, I might even allow myself a second day without bothering to water the garden. It seems wet enough as it is.
Posted by Pomiane at 07:23