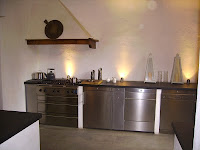 It's almost time to move into the new kitchen, up at Santa Caterina - a process I'm slightly dreading, but the result of which should be well worth the pain. A slight delay in the past few days, as we discovered that the new fridge which had bounced all the way across Europe in the company of the welsh slate was in fact five millimetres wider than advertised, which has meant demolishing and rebuilding one of the support walls for the counter tops, in order to fit everything in. Things could h 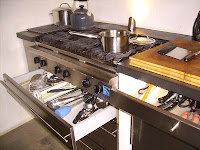 ave been worse, I suppose; last time we did this, with the current kitchen, the stonemason blithely sliced ten centimetres off one of the slabs for the work surface, and we had to order a whole new piece all the way from Wales...
This is the fourth kitchen we've designed over the years, and from each one lessons have been learned and incorporated into the next version. Some very straightforward things, for example:
Tonight's Dinner:

Papardelle with a sauce of Ragu and Rabbit Livers.

Apple Soufflé.
Posted by Pomiane at 08:16

Good luck with the move and thanks for the list of ideas for the kitchen. Our new one is going in next week and I've been wondering about where "stuff" will go. I like the idea of pans hanging near the stove. Please post lots of photos when you're in - sounds wonderful. Sue