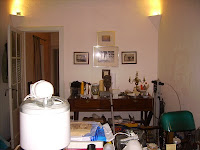 The move. The pantry has now been (almost) emptied, and racks of china and pots and pans now fill the office, waiting to be moved up to Santa Caterina. The glass shelves in the kitchen have been emptied and removed, and will be installed in the new scullery, I hope, today. It's all rather complicated, as the Brazilians are still working on the new house, but since we've agreed to complete on the sale of the ground floor of this one by April 15th - by which time the staircase has to have been removed and all trac 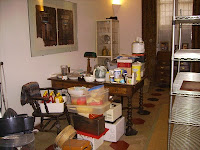 es of it 'repristinato' - then we're working to a tight deadline. I can't start to move furniture into the new house until the tiles have been completed on the Santa Caterina Staircase - which means not before Wedne 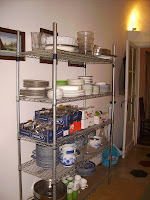 sday - but at the same time want to have emptied the rear part of the ground floor of this house before then, as the Brazilians will be moving in to start to remove the staircase on Thursday. But they, in turn, have to have completed the walls for the new Lily pond up at Santa Caterina before then, as the stair treads from here are going to be recycled as coping stones for the new pond, and it makes sense to be able to install them immediately they stop being stair treads.
Either it's all very organised, or else it's a complete bugger's muddle. I can't quite decide which.