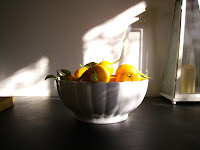 ...from Brancoli, in the shape of industrial quantities of Bitter Oranges, accompanied by a jar from the last batch of marmalade (most of which was promptly consumed in one sitting, at breakfast, this morning) and a rather splendid panettone ( re which I foresee panettone-bread-and-butter-pudding at some point very shortly). The Brancolis were passing through en route back to London, and bemoaned the fact that they'd spent much of the past we 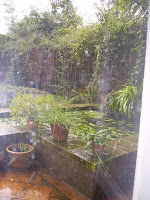 ek in their mountain eyrie walled-in by cloud, as last Saturday's spring sunshine turned out to be a false dawn, and gave way to days on-end of gloom and torrential downpours. Until today, that is, which dawned bright and clear, and was actually warm enough for us to throw open the french windows for the first time this year - always a red-letter day in the calendar. Brancolis departed for the airport, looking slightly miffed to be leaving behind them the first good weather they'd seen, a 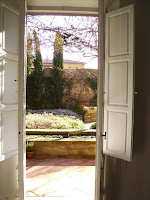 nd I spent a happy hour in the garden poking and prodding at things and noting the appearance of green shoots on wistaria(s) and spyrea and newly-planted climbing roses (yes, more...)

As I was going to get bread for breakfast, Lampacione were for sale outside the Amantea Man's shop in Via San Francesco, which is another reliable sign of Spring advancing. At the bakers, though, I was thwarted in buying bread from Altamura - the wonderfully chewy loaf that I normally get, but which for some inexpliable reason is unavailable outside 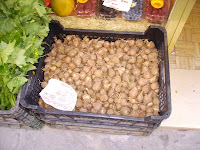 university term time - and instead in its usual place on the shelf (right beside the splendidly named Bruta di Pontadera ) was Pane di Laterza. Effectively the same thing, I was assured, since Laterza and Altamura are only 20 kilometres distant from each other....that and the fact that the cross inscribed on top of the loaf is small in Altamura and very much larger in Laterza. Which makes all the difference, for sure, when you're making toast!