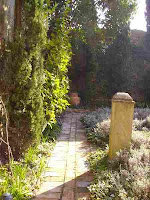 Spring is doing its best to get started - although it was clear from the state of the citrus trees when we arrived last week that there'd been a heavy frost sometime recently, and the lemons and bergamot were looking distinctly sorry for themselves. No longer. The temperature has soared in the past few days, and the shoots of the spring flowers are pushing forward purposefully. Massed ranks of narcissus throughout the garden; white crocuses against a background of lush ground cover (white-flowering vinca minor, which I planted, and a sea of violas, which I didn't, but which are very welcome all the same); the Camellia Japonica covered in pure white blooms, with many more to come; blossoms just opening on the Armandii, which means that the south pergola will be awash 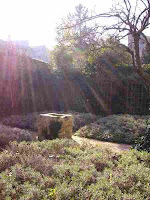 with fragrant blooms a week or so from now; fresh leaves opening on all of the roses, and even some buds on 'Mrs Herbert Stevens', which is always the first to come into bloom, and to my mind heralds the true end of winter each year. The climbing hydrangea and the jasmines are all limbering up to do their stuff, and look set for a good display.
After certain (sometimes heated) discussion, the Technical Department and I have finally come up with an agreed planting scheme for the loggia, which is to cover the walls in a variety of musk roses (my preference) and holbelia (his). Watch this space...

Gardening and cooking seem closely related, IMHO. I'm not entirely sure why...perhaps the same sort of impulses to do with creating order from chaos, and in taming nature in tooth and claw. Certainly, in both activities there's a slightly uneasy combination of control-freak meets creative-impulse (which doesn't invite close examination; some things are better left well alone). Most cooks that I know are also keen gardeners. Not all of them, that's true, but I suspect that th 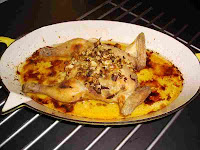 e cook who isn't a gardener is marching to a different beat from the rest of us. Less 'home and hearth' oriented, somehow.

This week's culinary departures: a praline and chocolate flavoured Crème Caramel (in fact, a more robust version than the usual, as this one also has soaked amaretti biscuits included in the mixture), which got a thumbs up from the TD; and a new variation on the boned and roast chicken, but this time with a stuffing based on Marsala and Porcini, with a truffle-infused cream sauce. Not

And I've been dipping into Patience Grey's 'Honey from a Weed', which is an absolute pleasure. Lots of familiar references, from her time spent living at different times in Tuscany and in the Cyclades...from a passing mention of 'Da Cammillo' in Florence, to the image of the weatherbeaten black-clad donkey-ladies in Greece who used to rap on the garden door in the mornings, with offerings of horta (greens) or fresh mulberries, or bunches of flowers that were heady with the scent of herbs from the fields. Happy memories, of a world which I suspect has now already disappeared.