Well, first blood on Friday evening went very definitely to the Technical Department and his Grand Marnier Soufflés. Superb! Show-stoppingly good, in fact.
Notwithstanding the unforeseen difficulties encountered by the rest of us with the first two courses, there was no question but that the dessert was head and shoulders the winner for the evening...

And the difficulties? Oh, nothing major (hollow laughter) : when I came to retrieve my

squid from the fridge in order to stuff them, it was only to discover that the fishmonger had not only cleaned them, but had then proceeded to cut the cleaned sacs neatly into small pieces, making any idea of stuffing them quite impossible - and so the dish was re-born as a Squid and Porcini ragu instead, stewed in white wine, with piselli. And Jennie's minor obstacle... was the

discovery half way through prep that her recipe (Pork with Fennel & Almonds) in fact had a Page 2 to it, that she'd omitted to photocopy and bring from London. We're still wondering what in fact the 'pinch of.......' should be, which gets added just at the foot of page one, even before the rest of the recipe unfolds. And so, while she and I were consoling ourselves with the fact that our recipes were unarguably completely unique and never-before-produced, since we'd had to make them up on the spot, we took the first mouthful of Grand Marnier Soufflé and just fell silent. There was really nothing further to be said...

Here's the recipe (taken verbatim from the TD, so not set out in my usual format) :

Souffle au Grand Marnier
This is eaily the best souffle recipe I have come across. It is an adaptation of Alain Ducasse’s version. The souffle mix is just custard and sweetened egg white. The flavouring is added by burying a thin slice of liqueur-soaked cake in the souffle. This gives a better flavour hit. If you don’t have Grand Marnier any other interestingly flavoured liquer would do as well – Sambuca, Madarine Napoleon, Cointreau, Anisette or Pastis or, even, Ouzo, Framboise, Poire, well the list is endless. You can buy the cake – or if desperate use a thin slice of white bread – once it is loaded with liqueur the difference is small. If you want to make the cake, here’s the recipe.

180g Egg white
110g Icing sugar
100g Egg yolk – about 6.
65g Corn Flour
65g Plain Flour
Whip the egg whites until firm and incorporate the sugar and then stir in delicately the yolks with a spatula. Then gently fold in the sieved flours. Spread the mix thinly( 6-8mm) on a Silpat sheet or greaseproof paper laid on a baking sheet. Bake for a few minutes at 200C until just coloured. Leave to cool on a grill.

I use souffle dishes which are 10cm dia. x 6cm. The quantities here make four.

25cl Milk
8g Powdered milk
15g flour
50g sugar
50g egg yolks – about three but check.
Make a custard in the usual way. Bring the milk to a boil and pour over the other ingredients mix together with a whisk. Return to the heat and keep stirring until the mixture is thick and hot (80°C). Or use a Zimmertopf to heat the blended ingredients. This is enough custard for 15cl of egg white and 75 grams of sugar.

Assembly
Butter and sugar the moulds. Cut an 8cm circle of cake, 1 cm thick or less, for each dish and dribble Grand Marnier on the slices until nicely sodden. Whisk the pastry cream until smooth. If the cream has been kept in the fridge, you will need to warm it a little first, otherwise it will be too thick to blend with the egg white. Whisk the egg whites, blend in the sugar, whisking until firm. Then fold in the pastry cream. 1/3 fill the moulds, add the liqueur soaked cake and fill the moulds to the top with more mixture. Run a finger tip around the circumference so that none of the mixture is touching the rim.* Bake on a metal sheet for +/- 12mins in a pre heated oven set at 220C – you may need to adjust the cooking time. Souffle is an egg dish and all egg dishes are cooked by ‘eye’ not by time. Dust the surface of each souffle lightly with icing sugar and serve at once.

* Once assembled the souffles can stand at room temperature, or slightly cooler, for up to an hour with little loss of volume.

Last night's dinner was a starter of Tomatoes and Gorgonzola Piccante on a flaky pastry base, followed by Involtini, stuffed with artichokes, served with deep-fried zucchini flowers, and then we finished with White Chocolate and Raspberry tarts, in Dark Chocolate pastry shells. The jury's still out on the winner, as TD thought the first course was technically perfect, while I thought the dessert had the greater flavour-hit-wow-factor... and since Jennie had made both of them, she sat by and let the conversation take its course. Which was still not concluded by the time we were researching macaroon techniques (Hermé in comparison with Ducasse) in order to produce a batch as a way of passing the time this afternoon between lunch and supper. (Delicious! Flavoured variously with Lime, Praline, and Balsamic Strawberry....) 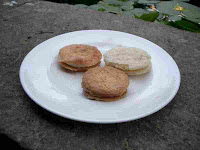 Pasta with a sauce of Nepitela, Capers, Parsley , Garlic and Tomato (TD)

Trippa all Parmigiana (Me)

Definitely one dessert to try!
I wanted your opinion on a 'creation' I made last night in the kitchen. Having had fresh crab the day before and some left over, I made a broth from which I produced (help of a G Ramsay recipe ) a crab bisque to which I added a touch of chili. Perhaps a bit boring... but I had some fresh cress in the garden and a bit of a glut of cucumbers (the nice tasty lebanese ones that everyone should be growing), so I made individual souffles - should I say 'mousses' - of grated cucumber and lightly poached cress in a well seasoned cream base. Serving: A souffle in the middle of a large soup plate sitting as an island surronded by the bisque. I will admit the flavours of cucumber cress and lobster married very well. But I wish I had a fool-proof recipe to make a nice mousse. I was reticent to make one with 'jelly' thinking it would not do much for the taste and may melt and lose its shape.
Congratulations on your food gala week-end - wish I was there. But off we are to south africa (some of the best cooking in the world, in my view) to the Slow Food Festival and the vineard regions for the next 3 weeks. Bonnes Vacances a tous.

The dish sounds interesting and refreshing. Most mousses are fairly stable but usually can't be unmoulded unless they have been stiffened. If you want to unmould them into your bisque, there are three options. Either

i. by using egg which means the mousse has to be poached and cooled or
ii. with gelatine or other jelling agent such as agar agar. Any Bavarois recipe will give you the proportion of dissolved gelatine to cream base. The 'jelly' won't melt but it might make the mousse a bit tough if you use too much. Or,
iii. you could try putting the mousses in the freezer for 30 minutes or so to stiffen - alla semifreddo - so they can be unmoulded while very cold. Once unmoulded on the plate, they will warm up quickly enough.

I would recommend iii/ to start with because it doesn't change the basic mix. A bit of trial and error will show how much time in the freezer they need in order to be stiff enough to unmould.
In all cases you might need to line the moulds with clingfilm to be sure to get them to unmould.