...of Masterchef Weekend 2008 was agreeably representative of the entire event, with dishes ranging from excellent, to good, to kind of ho-hum...

Deep-fried Sage Leaves with Aioli - first class! Inappropriate for a heavy date, with all that garlic washing around, but the taste buds were certainly tingling as a result. Trippa alla Parmigiana was ....well, ok...I suppose. I wasn't converted either to or away from tripe as a result of the experience, and in fact I realised in making it that the recipe is almost identical to that for Lentil Soup (sofritto of aromatics, then wine and tom

atoes added along with the main event for the dish, and finished off with cheese, and in this instance borlotti beans). It is delicious, but the tripe gets lost amongst all the other ingredients (which is perhaps the whole idea), and as the sticks-to-tiny-ribs dish that it is, it would be better suited to an evening in November than to the heatwave we're currently experiencing.
And Zucotto is good...but when all's said and done it's more of a presentational trick than any thing else, and all you really get is some cake with a couple of different flavoured mousses inside. And we're still finishing it off, three day 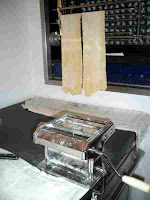 No, the star of the evening was the pasta with Nepetella and caper sauce. Excellent! As we all said repeatedly as we hoovered it up.....

And the text is as follows:

One of Italy's oldest herbs is nepetella. - a variety of wild catmint(Nepeta calamintha). One finds it referred to frequently in the cooking of Ancient Rome, but - probably because it was common - it became associated with the cooking of the poorest and largely fell out of use. Rather like Thyme in Greece which is hardly ever used in cooking even though the hills are covered in the stuff. This sauce is one of the best ways to use nepetella, but you can also use the herb in place of common or garden mint for a subtler and more interesting result. If you think of this dish as a herb version of aglio-olio, you can visualise the result.

For 4
A good handful of fresh nepetella leaves.
50gms of capers, fresh or, if preserved, well rinsed and drained.
Parsley - half the quantity of nepetella
1 clove garlic, finely chopped or crushed.
A little fresh tomato - i.e. 3 cherry tomatoes or the equivalent. If you grow your own, the stunted, wizened ones which are no good for salad are perfect here.
¼ cup Olive oil
Salt and pepper.


Soften the garlic in the oil in a large frying or saute pan, ideally the pan should be large enough to take the quantity of pasta you are cooking. Chop the herbs and capers finely and add them to the oil. Turn the heat down to minimum. Add the coarsely chopped tomato. Cook for 5-10 mins. Turn off the heat. Season with salt and pepper to taste. When the pasta is ready, just scoop it out of the water and add it to the herb mixture and stir well. Add a little pasta water if the herb mix is lumpy and doesn't blend in. Serve at once.

And to finish off, the evening, we had a celebratory game of Scrabble, accompanied by our own-production grappa. Modesty forbids me to say who won, but suffice it to say that by the time we called it a day at around 1.30, it was with a glow of modest pride that I retired to bed.

Monday morning, and we sat long over breakfast and coffee, and then more coffee....until we noticed that in fact it was time for a Kir, along with some reviving roast almonds....and by the time the second Kir was fnished, it was time for Jennie to summon a taxi and disappear to the airport.

And it was all over for another year...