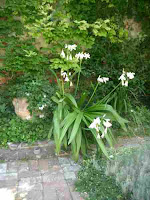 ...of a week. Much tearing of hair about the fact that the internet connection has been haywire for the past ten days - ever since FastWeb (who provide the line) turned up, uninvited, to make a couple of 'little tweaks' to the setup, as a result of which nothing has been Fast, and for much of the time there hasn't even been any Web! Since I'm in the middle of about five projects currently, all of which require web access, I've spent much time round at the Internet Cafe in Viccolo Tinto, and in the process discovered where all the tourists in Pisa spend their time when not actually posing for photos at the foot of the Leaning Tower... 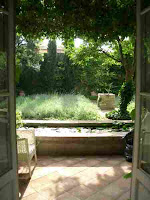 The weather has been glorious, and every day I've basked and wilted for half an hour or so in true Mad Dog style beside the old well in the centre of the garden, where such breeze as there is catches the leaves of the Cacci Tree, and I've soaked up sun and kir over a book - mostly Gillian Darley's biography of John Soane, who was an unpleasant old bugger, by all accounts (as well, IMHO, as being really rather an indifferent architect).

Attempts to address the Basil Mountain have continued, with the discovery of a most delicious r 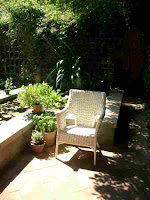 ecipe for a sorbet of Oranges, Lemons and Basil Leaves (2 Oranges; 6 Lemons; and 24 Basil Leaves, along with a syrup base made from 630 ml of Water and 320 gm of Sugar). The flavour of Basil is surprisingly subtle in the finished product, but the taste overall is spectacular, and perfect to be served in a small glass as an interlude in the middle of a sweltering afternoon!

Otherwise, I've finally got around to making pasta once more, since the disappearance of Claudia's fresh pasta business at the beginning of the year has left us without a really first-class supplier nearby - the shop in Borgo Largo is OK, but frankly I can do as well myself, and so why not? I made a batch of black pasta at the start of the week ( 2 US cups of tipo '00' Flour; 3 medium Eggs; a teaspoon of Olive Oil; and a sachet of Nero di Seppie), which I then divided in two, and used half to make linguine for one evening (which we had with heated-up potted shrimps - simple, and very good) and rolled the remainder the following day to make black ravioli, with a filling of Spinach and Ricotta, along with some Anchovy and Parmesan. The amount of pasta worked perfectly, and the consistency of the dough was that wonderful mid-point between being silky and leathery - I might take some '00' back to London with me, since it works quite so well. 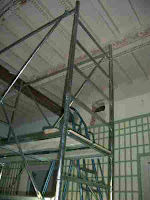 Michelangelo (The Technical Department) has been toiling away with restoring the paintwork on the Loggia ceiling, and every so often I go along to be Papal, and cast an eye over progress. It does look rather splendid, and is now very nearly complete. The earlier painting dates from when the house was last re-fitted, in the middle of the nineteenth century - and so of no great age - but in the process the TD has uncovered the remains of earlier paintwork in azurite, which look as though it dates from the same period as the painting on the ceiling beams in the Salone, which is probably two hundred years earlier..... 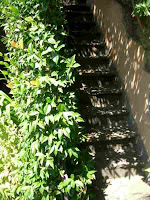 Jennie arrives this afternoon for Masterchef Weekend 2008, so the kitchen will be in full use for the next three days. I'm taking the opportunity to knock off some things I've been meaning to do for years but have never got around to (so, this weekend tomorrow finally comes...) : Squid stuffed with Porcini; Trippa alla Parmigiana (I've never actually eaten tripe, let alone cooked it - but how bad can it be?) and Zucotto....

Squid Stuffed with Porcini, braised in White Wine (Me)