The First Peach of the Year.... 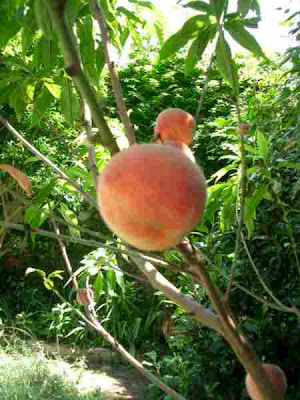 Delicious and sweet! Small, admittedly, but the flesh was juicy and the flavour intense. I wouldn't have thought to pick it, but as an unfortunate windfall, found beneath the tree yesterday morning, it was duly sacrificed and was found to be perfect...

In a garden which has such a vibrant bird population as this one, the chance of getting a decent peach crop is next to nil, as the fruit - for the most part - is delicately pecked while still on the branch. I can't say I begrudge the birds their plunder, since the birdsong is such a pleasure, and it was never the idea that we wanted to be self-sufficient in Peaches anyway, given the abundance that's readily available in 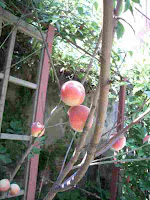 the market all of three minutes' walk away. In any event, the fruit looks wonderful on the tree, and the smell of peaches in that part of the garden is pretty heady.

To Osteria Violino for dinner last night, in Via Tinta, just across the river. Giovanni and Lara recommended it ages ago, and Sarah took us there for the first evening of her weekend here. Quiet - in fact, we were the only people there - but the food was good: swordfish carpaccio, and a delicious leek sfor

matino, followed by a squid-ink pasta that was as delicious as it was alarming, colouring everybody's lips and teeth a dense goth-new-romantic black that looked rather worryingly indelible as it was transferred delicately onto napkins. Definitely not a dish for a romantic date! All washed down by a very good bottle of Falanghina - which seems to be this year's 'wine of the moment' .....A langorous stroll home across the Ponte di Mezzo, and through the crowd in Piazza Garibaldi who were half-concentrating on the antics of a live band performing under the arcade of the Casino, and then home, to sit in the candle-lit loggia, drinking grappa and contemplating the campanile of San Francesco illuminated against the night sky. A summer night in Tuscany....

And the passing of an era. A phone call earlier this week to our aged Falegname, Bruno, elicited the throaty response from his wife that he was 'under the ground'....and thinking that she meant he was in the cellar, the question how long he was likely to be down there got the unamb

iguous reply: "permanently. We buried him!" He was eighty seven, and had lived in Cascina, a few miles down the road from Pisa, for his entire life. He learnt his craft before the last war, presumably from somebody who had trained in carpentry in the last years of the nineteenth century, and had laboriously over the years churned out for us beautiful doors, and shutters, and french windows, and an enormous refectory table...all crafted with a skill that nobody knows any more. Poor hearing meant that his interminable stories were always told at full volume, and his grasp on modern life certainly stopped short of the appearance of the euro - to the end of his days he could think only in terms of lire, and always appeared suspicious and confused when confronted with payment in the new currency. Never enough noughts on the end for his comfort. A true character - he will be missed...

Fiorentina, with Arugula and Parmesan

oh, how I envy you that peach! There is nothing nicer than one picked fresh from your tree. It's a long time since I did that.

Would have been even nicer had I actually picked it, and were it not the case that the birds manage to pick most of the crop while it's still on the branch! Still, it WAS delicious.....