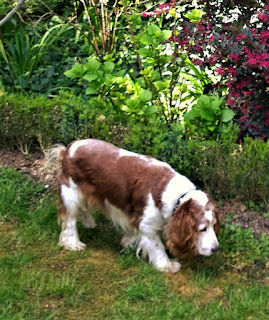 Important people have lots of names: King-Emperor; Lord of the Isles; Baron Hows-your-father; Chief Poo-Bah. Well, on that basis, Cuff was a very, very important personage, since he had more different names than you could shake a stick at, and all of them were used over and over and over, and always as terms of endearment. They emerged and were hatched unprompted, over time – where they actually came from is anybody’s guess.  He was:

And, although it wasn’t a name, but was more something to be intoned, he was often scooped up, and told, whilst holding his gaze from six inches away, that he was Best-dog-in-the-Word-type-dog-type-thing-type-Cuff.  Following brief consideration of which, he would generally lunge forward to give his signature version of a kiss, which was just to press his snout briefly against my nose, and then just as quickly to withdraw again.

I suddenly remembered, this morning, the game that he made up, which was, while we were having dinner,  to balance a tennis ball on the narrow bar that runs beneath the dining table, and then to wait for it to be discovered, and for it to be thrown for him, through the doorway and across to the far end of the kitchen, for him to chase, retrieve, and return. I think we were supposed not to know that the ball had been placed there by him,  as he would never balance it there if he knew he was being watched; and so, I never actually saw him do it. Which is a shame, as it must have required a lot of dexterity, since the bar is narrow, and to balance a ball on it requires skill. Not only that, but the ball would always be placed exactly at the mid-point along the length of the bar. Once placed, he would then position himself, either sitting stage-left, or else sitting just through the doorway into the kitchen, as though he would attempt a goalie-save as the tennis ball sailed past. Which, sometimes, he managed. But mostly, it was a question of chasing the ball across the kitchen, and of trying to stop it before it reached the far end of the room. If it bounced and it landed in a chair, then he couldn’t get it, since moving the furniture was Strictly Forbidden. And, if it went into the corner, behind the lamp flex that snaked across the floor behind the chair there, then he couldn’t get it either, since flexes Could Not Be Crossed. Ever. (I think he must have managed to get caught in one once, early in life, and he’d pulled a laptop or some other appliance down onto his head, and so flexes were ever afterwards to be avoided). If either of those things happened, then he would stop, and stare fiercely at the ball, from a distance, and let out an occasional whimper of excited distress, until one of us would go and retrieve the ball for him from wherever it was, and the game would carry on from there.

Until he got bored with it. Which could take a very long time.

Often, a visitor taking coffee might find Cuff positioned in front of them, alert, and regarding them with an expectant gaze, which they wouldn’t understand. ‘He wants you to throw his ball for him’, they’d be told. And in response to them saying that they didn’t have his ball, they’d be informed that if he had that expression, then they almost certainly did. And a search would always reveal a tennis ball which had been quietly placed on their chair, which they wouldn’t have noticed, and it had often been pushed between their leg and the edge of their seat.

And the most complicated version of the game was when we used to have dinner, in summer, out in the courtyard, and the ball would be thrown up onto the decking terrace, upstairs. It took him a while to work it out, but eventually, he understood that to retrieve it he had to run into the house, through the pantry, and through the scullery, and into the kitchen and then go up the stairs, and go through the salone, and through another small room, and then out onto the terrace, where he would find the ball. And his face would then appear, peering triumphantly down at us, over the edge the terrace, ball in his mouth. Success! And on those occasions, sometimes he stayed up there for a while, savouring his victory, before he retraced his steps and he relinquished the ball once more. For a repeat.

And, we’re having to deal with the fact that all the repeats are now finished. And that there will be no more. Which is hard.

We’ve done the only thing which anybody can do in the circumstances, which is to go and look for a Puppy. It isn’t a replacement; it could never be that. It’s a Different. And, if we’re lucky, it will be a Comparable.

And, I think we’ve found the one.

She’ll be coming home with us two weeks from now.

And, on an appropriate level, I think that Chief Poo-Bah, Lord of the Isles, the King-Emperor himself would understand. 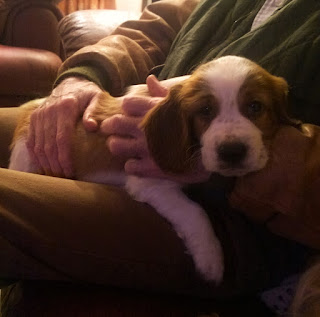 Gnocchi of Ricotta and Spinach

Pasta, with garlic and pepper sauce