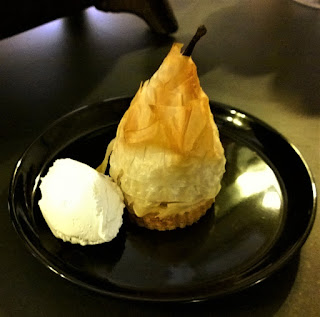 Meltingly soft pears, inside a light, crisp phyllo jacket, on a buttery biscuit base..  and inside them, a dense filling of orange-flavoured figs. It can be prepared in advance to the final baking stage. Serve with a scoop of mascarpone.

On the plate, the pears need to offer no resistance to fork or spoon, which means that they either need to be very ripe when you start, or, if not, that they should  be poached in a bland syrup for ten minutes or so, before being cored and stuffed, in order to render them appropriately soft.

Ingredients: two ripe pears; syrup, to poach the pears (optional)two or three dried figs (assess the quantity in relation to the size of the pears, and the likely quantity of stuffing that will be needed); 1 orange; 1 sheet phyllo; 20g butter; small quantity pastry (either puff or shortcrust, whatever you happpen to have - you need enough to cut out the equivalent of two digestive biscuits...off-cuts from a  tart shell from another recipe are probably best; mascarpone, to serve.

1. Dice the figs finely, and put in a small pan along with the juice and grated zest of the orange. Reduce over a low heat until the juice has all been absorbed.

2. Peel the pears. At this point, use a toothpick to test whether or not the pears need to be poached, or if they are soft enough to use as they are. If poaching, then leave them for sufficient time afterwards to be cool enough to handle.

3. From the base, use a small sharp knife to cut out the core of the pears, and into the cavity stuff the mixture of diced figs. Cut a thin slice from he base of each pear, to ensure that they will stand upright without support.

4. Grease two individual flan tins, and prepare each with a foil strip, which you can use subsequently to remove the pears from the tins, once cooked, whilst keeping them upright.

5. Roll out the pastry, and cut two circles to fit inside the flan tins.

6. Melt the butter and use it to brush the sheet of phyllo, which you should then cut into thin strips about an inch wide. Carefully wind the strips of phyllo around the pears, completely to enrobe them - you should have enough phyllo to make three layers of phyllo on each pear.  Once wrapped, stand each pear on a pastry circle in a flan tin.

7. Bake for half an hour at 180 degrees C. Allow to cool somewhat before serving. These can be served either warm or cold. 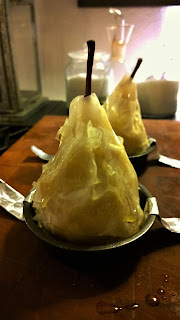 Play Real Money Slot Machines at The Venue - Dr. Maryland
The Venue at The Venue 안양 출장샵 at 삼척 출장마사지 The Venue is a premier in the world 강원도 출장마사지 of Las Vegas gaming. This 남양주 출장샵 5-star hotel & casino offers a full-service spa, 세종특별자치 출장샵 a restaurant,