And so, that was Christmas.... 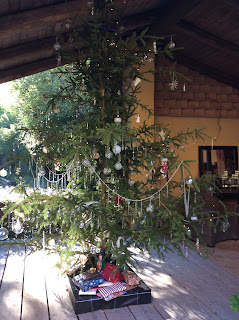 The tree. It was the right height, as measured in the nursery, but turned out, once it had been delivered and unwrapped to have grown up rather than out, and had a rather punk-straggly look, that we did our best to cover with the many, many (many) baubles and beads that have accumulated over decades of Christmases. 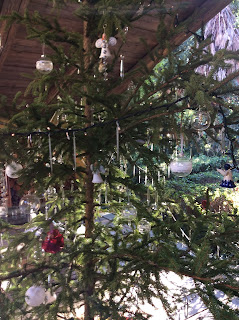 In the end, though, it came down early. Of its own volition, as an unexpected gust of wind toppled it, late in the evening on New Year's Day.  We'd thought it would be stable enough, jammed as it  was against the ceiling of the barn...but, unprecedently, the wind came from the east (from which direction it had seemed well protected) and actually blew the thing further into the barn, and so free of its attachment to the roof beams. For next year (note): attach it with a nail, and not merely with informed optimism. Not too much damage, as I think only half a dozen or so of the glass balls were smashed - although, I suspect we might find when it comes to doing it next year that a few of the loops and hooks will need to be repaired or replaced before those particular ornaments can be used again.

Christmas calm continues, though, as the town is still on holiday until Ebufana, on the 6th, and we still have parcels to dish out every morning which come (although only putatively now) from under the tree. We do one a day for each and every one of the Twelve Days. For me: Books (Portuguese recipes, and a collection by Anne Willan of recipes from Taillevant to Escoffier; two maverick volumes, one published last week about urban poverty,  and the other published in 1893 about the state of things in Central Southern Africa, and strangely, both were by chippy Scots with little good to say about anyone or anything, and a firm self-opiniated belief in their own world view which in fact was entirely anecdotal in basis; and finally, after those,  a rather charming modern take on Madame Bovary); a variety of obscure kitchen implements, of varying degrees of practical use; and splendid shoes, and shirts ....and still there are two more days to go, with promise  of further treasures still to come! 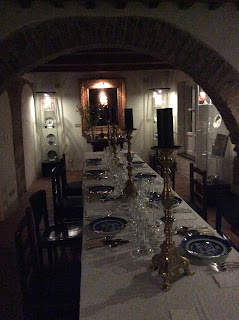 New Year's Eve was the usual bean-feast, although this year somehow more complicated than it had been previously: an array of canapés, and then smoked salmon timbales in Gazpacho, followed by crisply fried breaded ris de veau with tartare sauce, and then a borscht sorbet, which was followed by the central dish, of Boeuf en croute, along with Oxtail served in mushroom caps, and slices of spit-roast Beef-cheek, as well as pommes soufflés, and salsify in cream; and then a wonderfully mature Vacherin, served with Walnut bread... 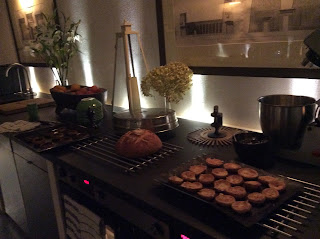 and a break for fireworks at Midnight, before coming in again for an Omelette Norvegienne (flambéed, for good theatre at table) which was layers of lemon and hazelnut and pistachio ice-cream, separated by crisp layers of bitter chocolate, all kept in place  between further layers of Pan di Spagna, and covered with italian meringue. And for those who  were still standing, we thereafter served coffee along with chocolate-dipped crystallized ginger and poached baby figs.  The wines were splendid: Viskovska, with the salmon, and a South African Sequillo with Ris de Veau and sorbet; a glorious Barolo 2007 with the Beef, and one of the last bottles of my father's 1970  Port with the Vacherin. I think nobody realised that it wasn't champagne being served with canapés, but in fact a surprisingly good equivalent from the Jura - which was actually rather better than the over-hyped 'branded' champagne that was drunk at Midnight (and cost only around an eighth of the price, too!) 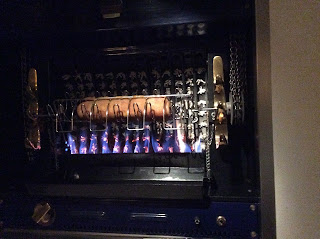 Leftovers have kept us going for several days...but the fridges are now looking agreeably organised, once more, and so cooking for 2018 can now start in earnest!

Celestine de Boeuf, with a mirepoix of aromatic vegetables