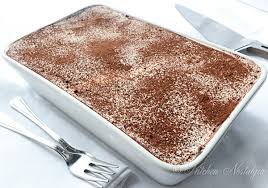 This is a version of Jill Norman's version, where she used grappa, and I've replaced it with Strega (which has a flavour as well as a hit....whilst grappa , at least when consumed like this, really only has a hit). This method produces a tiramisu which is light as love, and is a completely different animal from the usual version, which - let's face it - can be a bit unremitting, and certainly has a tendency to sit heavy on the stomach.

Follow the construction method here to make either one large tiramisu, or make them in individual 10 cm ramekins. If doing the latter, then put crossed strips of foil across the base of the ramekin before you start, so that you can then un-mould the individual desserts, keeping them the same way up as they were made, for serving.

1. Beat the egg  yolks with the sugar, then mix in and fully amalgamate the mascarpone and the strega. Refrigerate for 2 hours.

2. Beat the egg whites until stiff, and then fold into the mascarpone cream.

3. Grease the bowl or ramekins in which the dessert is to be made, and if using ramekins, line them with crossed strips of foil (also greased) to enable ease of serving.

4. Mix the water and marsala together in a flat shallow dish, and quickly dunk the biscuits in this mixture as you go along, just before you use them to make the layers of the tiramisu.

6. Refrigerate the dessert(s) for at least 2 hours, and up to ten hours. Just before serving, sprinkle the top of the tiramisu with powdered chocolate.
Posted by Pomiane at 14:36