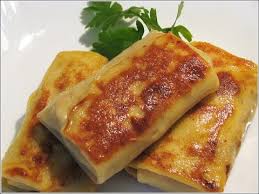 I've been rediscovering Robert Carrier, to best effect from his first, and probably greatest book: Great Dishes of the World. All sorts of gems, which have presumably been largely forgotten in the half-century (and more) since this splendid tome was first published: Rabbit in cream is one such which immediately springs to mind.   The dessert section is excellent - although n.b that the quantities of sugar need to be severely cut, to be suitable for now ....we seem to have much less of a sweet-tooth now than they had back then (also true in dessert recipes from Anna del Conte, I've found, and quite a few others who were writing in the sixties and seventies...although, interestingly, not Jane Grigson, or early Anne Willan, or Paula Wolfert. Maybe it isn't a 'period' thing  but merely  the fact of certain people having liked sugar more than others....who knows?)
This particular recipe is extremely good, and it has the twist - for me, at any rate - of introducing the idea of frying crepes, once stuffed, rather than merely heating them through in the oven. The difference is astonishing: texturally, the crispness of the fried crepe and the softness of the filling raises the dish to another level; I now use this method for all stuffed crepe treatments, whether sweet or savoury.

2. Melt half the butter in a frying pan, and in this cook the chopped muchrooms with the lemon juice for a couple of minutes.

3. In a simmertopf or double boiler, melt the remaining butter, and in this soften the chopped onion for five minutes or so, until properly softened. Add the flour and then the milk to make an onion-bechamel, stirring until the sauce is thick and smooth.

4. Fold into the bechamel the mushrooms, along with the cooked ham and parsley. Add seasoning to taste.

5. Use the filling to stuff the four crepes, spring-roll style, to make four completely enclosed packages.

6. In a frying pan large enough to accommodate all four stuffed crepes, melt the remaining butter, and fry the crepes in it for two minutes or so on each side until brown and crisp.