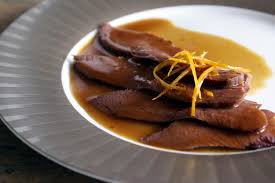 This is a sauce which has knocked around enough that by now you can find easy quick versions of it littered around on the internet - and I'm sure that even they must taste of something - but, like most traditional sauces of this quality (e.g the port sauce, the recipe for which which I've posted elsewhere), the real McCoy is a great deal more complicated to make properly, and is worth every time-consuming step along the way. Properly made, this is a sauce packed densely with a whole host of subtly different flavours, all working with and against each other, to great effect. Normally, it is served with duck, but in fact it works well with any dark, grilled meat.
This version comes from Louisette Bertholle's 'Secrets of the Great French Restaurants', where its provenence is listed as the Hotel du Dauphin in L'Aigle. Bertholle was the third member of the triumvirate responsible for Volume I of 'Mastering the Art', although she had no part in Volume II (the reason given at the time was that she had gone off to get married in the meantime - but, since that didn't seem to stop her from producing a whole lot of other books quite independently, one can't help but wonder whether in fact she'd hadn't just had enough of the late great Julia....and if Richard Olney is to be believed, there was quite a lot of the LGJ to have had too much of!). The book has much to recommend it - although, inexplicably, the original french version seems to have lost some of its content in the process of translation into english...for example, an absolutely excellent recipe for a 'marjolaine' cake in the french version seems to have got left on the cutting room floor by the time it had made it across the Channel. Be warned. Oh, and the other niggle I have is that this book without doubt wins the award for most witless index of any book of reference of any kind, ever - recipes are exclusively indexed by name of restaurant from which they come, rather than, as you might perhaps expect, by main ingredient. Go figure.
Take your time over making this sauce, preferably making it entirely the day before you're going to serve it. The quantities here are substantial, but it freezes well, so there's no good argument to try to make a smaller amount.

1. Make the espagnol sauce: in a small pan, heat the lardons until they start to give render their fat, then add to this the onions, and cook until they start to soften; add the flour, stirring to incorporate the rendered fat into the flour, then add the red wine and stock, along with the carrot, garlic, and bouquet garni. Bring to the boil, then reduce the heat and simmer very gently (probably using a heat diffuser) for between 2.5 and 3 hours. At the end of this time, sieve the mixture, taste for seasoning and add salt (lightly) as appropriate.

2. In a heavy-bottomed pan, bring the vinegar and sugar to the boil, until the syrup turns a pale golden colour; to this, add the grated zest of the oranges and lemons, and add to the simmering syrup for ten minutes.

3. Remove all of the pith from the citrus fruit, cut the segments away from their membranes and add to the sauce, simmer for another five minutes.

4. Add the white wine and the espagnole sauce to the mixture, bring to the boil, and then reduce to a simmer for two hours. The consistency at the end of this period should be a dense, coating consistency - if it isn't, then continue to simmer (and reduce) until it is.

5. Strain, and return the sauce to a clean pan, to reheat when needed for serving. Check and adjust seasoning before the sauce is used.
Posted by Pomiane at 12:26