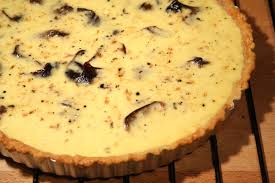 I've lost track of the number of versions of this recipe that I've come across - all are good, some are better than others. The flavours work perfectly together, and the velvety creaminess of the texture, if cooked correctly at low heat, is luxury incarnate! On one occasion, I remember serving this as dessert to 120 diners, at a banquet at Trinity House, and being inundated on the following day with messages of congratulation...all of which with due humility I passed silently on to Marco Pierre White (whose recipe, in essence this is). I've played around to a degree with the quantities in MPW's original, which I took from the pages of his improbably named 'Wild Food from Land & Sea' ; MPW is in general lousy when it comes to specifying quantities, and a common-sense filter is always advisable when translating his recipes from the page to the kitchen -  more often than not, his stated quantity 'sufficient for ten servings' would in fact comfortably feed an entire squadron.
Ramsay has a version which works almost as well as the MPW one, except that in Ramsay's version the filling is blitzed in a food processor before being poured into the tart shell - which has the, to my mind, unfortunate consequence of giving it the worrying appearance of brown sludge.
I've put 'Armagnac' in inverted commas in the title here, since although the trad title for the dish refers always to armagnac,  it would be nuts to use good armagnac for cooking, and instead a perfectly serviceable bog-standard cognac does perfectly well. Armagnac is for drinking.

For one eight inch tart, with accompanying sauce.

1.In a small pan, to 50g of the sugar add 75 ml water; bring to the boil, and simmer for one minute only over medium heat.

2. Dice the prunes into approx 1 cm dice and put in a small bowl. Add to these the sugar syrup and the brandy. Stir briefly, cover, and leave to macerate for at least four hours, and preferably overnight.

3. Blind-bake the tart shell at 180 degrees C, until the pastry has browned nicely. Reduce the oven temperature to 120 degrees C.

4. Mix together the egg yolks, cream, milk, remaining sugar, and vanilla.  Drain the prunes,  add the macerating liquid to the mixture in the bowl, and stir to ensure it is properly incorporated. Distribute the pieces of prune over the base of the pastry shell. Transfer the egg/cream mixture to a jug, and carefully pour into the tart shell as much of the mixture as you can manage to get in before it overflows - you should have about half of the mixture left over.

5. Bake the tart for an hour; the mixture will 'set' at this temperature, rather than bake.

6. While the tart is in the oven, pour the leftover mixture into a simmertopf or double boiler, and heat it gently, just sufficiently to cook the egg yolks.

Serve Tart and sauce while they are still warm (although served cold, they will still be pretty delicious!)