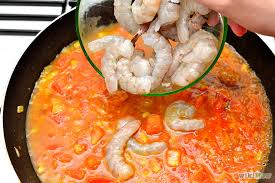 A re-working of an old standard. This version is the result in part of some lack of concentration on my part, which meant that ingredients got missed out along the way and so were added in a rush towards the end (and it was found to be better), and and in part through a sense of economy - specifically, the use of the heads and shells to make a bisque-light to use in the finished dish rather than just water, as the traditional method suggests. The end result has a creamy texture and is completely delicious.

Ingredients: 300g medium sized prawns, with shells, and preferably also heads (frozen and pre-blanched are just as good in this recipe as fresh and uncooked - fresh prawns merely require slightly longer cooking once they are added, at the end of the recipe); 1 medium onion; 2 medium tomatoes; 2 tbs oil (approx - it partly depends on the size of pan you're using as to how much oil is needed); 2 cardamom pods & 2 cloves, lightly ground in a pestle; half tsp cinnamon; 1 green chilli; 2 tsp fresh ginger, peeled and finely chopped; 1 large garlic clove, minced; half tsp each of red chilli powder and coriander powder; quarter tsp each of turmeric and of garam masala;  half tbs cumin; half tbs tomato paste; 1 cup white wine.

1. Shell the prawns and remove their heads; liquidize the shells and heads along with the white wine, and then filter the mixture through a sieve lined with kitchen paper.

2. Heat the oil in a large saute pan, and once hot add to it the cardamom, cloves and cinnamon. Stir for about thirty seconds, then add the finely chopped onion.

3. Once the onion has softened and started to colour, after about five minutes, add the finely chopped tomatoes, along with the ginger and the garlic, and cook, stirring, for a couple of minutes, until the tomatoes start to break down.

4. Add the turmeric, garam masala, chilli and coriander powders, and cook for a further five minutes.

5. Add the tomato paste and cumin, along with the wine/shell mixture and the finely chopped green chilli, and stir until the liquid has been absorbed. Turn the heat to low, then cover the pan, and leave to cook for 10 minutes. If the mixture becomes too dry, add water as necessary.

6. Remove the lid and add the prawns. If they were raw, then cook them until they turn pink; if they were already pink, then it is merely necessary to heat them through. Add two generous pinches of salt - more if you wish.


Garnish with chopped fresh coriander, and serve with Basmati rice.
Posted by Pomiane at 10:22