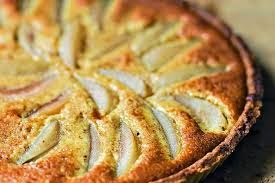 I had thought I had posted this recipe on here ages ago - it having long been in my repertoire - and was surprised to find it not there recently when I wanted to check on the quantities I generally use for the ingredents in the almond cream filling (the recipe was originally based on a version from Michel Roux, but I know I don't use his quantities, as his are for a much larger tart than I would normally make). Anyway, I realised that I hadn't ever committed it to blog, which seems a sad failing on my part. The tart is delicious, and using this method it could not be simpler to make.

When adding the almond cream to the shell, don't bother trying to spread it evenly, or to make it look neat - the amount of butter in the mixture in practice means that as it cooks it sorts itself out and levels automatically, and if you heap the mixture on top of the pears, in the centre of the tart shell, and put it in the oven like that, as it cooks, the cream adjusts itself to fill all parts of the tart shell, and puffs evenly all over.

Ingredients: 1 8" shortcrust tart shell (I make three such shells from shortcrust made from 8 oz butter, 10 oz plain flour 1 generous pinch salt, and 50 ml water....yes, I know, it's a hybrid of metric and imperial; that's what happens when a person's long ago schooling bridged the changeover between the two systems...anyway, the three unused shells go into the freezer, from where they can be baked from frozen as and when they're wanted); 2 large pears, of pretty much any flavourful variety; 2 tbs sugar, for sprinkling; 100g butter; 100g sugar; 100g ground almonds; drops of almond essence (optional, but I think necessary, since ground almonds these days have negligible flavour of their own, and need all the help they can get); 3 eggs; 2 tbs rum; apricot glaze (again optional, depending on how much of a perfectionist you are, and on how long before serving you have finished baking the tart; if it is to be left for several hours, it will look better for being brushed with glaze).

1. Pre-heat the oven to 180 C and then blind bake the tart shell until the base is partially browned but not completely baked.

2. Peel, quarter and core the pears, then cut each quarter into two lengthwise, so you have 16 pieces in all.. Lay the pieces in the partially baked shell, making an outer and an inner circle. Sprinkle with the 2 tbs of sugar. Put the pears in the shell back into the oven for ten minutes or so, to soften the flesh and to concentrate the flavour of the pears.

3. In a food processor, work together the butter and the sugar, then add the ground almonds (and optional almond essence), followed by the eggs and the rum. The mixture should be fairly dense.

4.  Out of the oven, spoon the almond mixture into the centre of the tart shell, over the top of the pears. It doesn't matter if the mixture doesn't go anywhere near the edge of the shell - trying to get it to do so will only mess up the arangement of the pear pieces and in any case isn't necessary, as the cream will sort itself out during baking.

5. Bake the tarte in the oven for about forty minutes. By the end of this time, the cream will have covered the entire tart, and should have puffed and browned.

6. Remove the tarte from the oven, and leave it to cool. At this stage, if using it, brush the surface with apricot glaze. Delicious either cold or still warm.