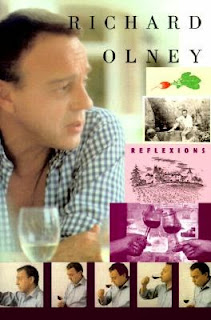 ...has been my reading material for the past few days. Mostly his memoirs, unfinished at the time of his death in 1999, but with forays also into 'Simple French Food' and into 'Lulu's Provencal Table'. The memoirs have been a complete pleasure, despite - or perhaps because of - their unedited and somewhat formless delivery. With little attempt to shape the events of his life into stories with clear structures, the result is a patchwork of anecdotes and memories, many of which lead to nothing beyond themselves and are merely what they are: recollections of events which occurred and people he met and things people said from time to time. Julia Child and James Beard don't emerge from it particularly well - although both seem diminished and mean as a result, rather than impressive and monstrous - and Nico Ladenis and Simone Beck and Elizabeth David, amongst others, shine brightly.
From the  inclusion of  numerous menus of lunches and dinners he produced over the years, I can see where I've gone wrong with him in the past - with both of the other aforementioned books, I dived straight into the dessert sections. Bad idea. Desserts are not Olney's thing, and were presumably only included at the insistence of his publisher. From SFF - before consigning the book for years to the unreachable and dusty upper shelves of a bookcase - I remember unwisely trying an apple dessert of some kind  the recipe for which he said had come from his sister-in-law Judith .....only to discover that said sister-in-law ('ex' by the time of writing) had, in Olney's opinion, neither any interest in nor any skill in cooking or any knowledge whatsoever about food. Equally, from his many mentions of dinners chez Peyraud, there is no mention anywhere of dessert being served, and one assumes that Lulu's attitude towards them was significantly the same as his, i.e that any meal should finish with a good selection of cheese (and another bottle of something appropriate). Dessert wine was something of which he was very fond, but it seems that he often foreswore the accompanying dessert, on the basis that the food might interfere with the character of the wine.
Odd lacunae remain, even after having finished the memoirs - called 'Reflexions' , by the way, which is an unfortunately 'cutesy' title, and presumably intended to suggest instinctive reactions to what has happened in his life rather than a considered analysis of them; the latter, he certainly doesn't go in for...things happen, you observe them, react as appropriate (or not), record them (maybe), and then move on.   But, where and how did he learn to cook? From where did he develop his abilities and knowledge about wine? And where is any suggestion of the breadth of knowledge and practical experience behind the twenty seven volumes of the Time-Life 'Good Cook' series which he so famously edited in the eighties? His spat with Julia Child over the best way to make pastry (apropos of which, he declared that just because she was on TV did not make her a good cook...) suggests that he was practiced in the art - but, apart from a passing reference to an apple pie, made in Clamart sometime in the fifties, pastry appears to have formed no part of his repertoire. In fact, on the basis of lunches and dinners recorded in the book, he seems to have lived largely on fish soup, salads, and cheese, with the occasional roast bird chucked in for good measure. Oh, and wine. In  quantity.
Significantly, he remains an enigma. And seems destined to be so for evermore, since it seems unlikely that anybody will ever now be inspired to write his biography, and anyway many of those who knew him well enough to be able to give a fair picture of the man are no longer around to tell the story.
I was pushed to read Reflexions by Charles asking the other week if I'd ever heard of 'some chap called Richard Olney', since he never had but had recently come across a reference by somebody else to the greatness of the man.  Which suggests to me that Olney seems destined either to disappear entirely without trace, or else to be resurrected as some kind of obscure but sanctified holy man of food. Neither of which I think would be entirely deserved.