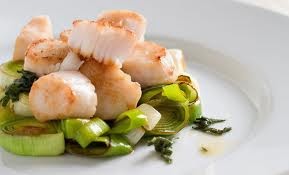 From Roger Vergé. Not only is this quick, easy and delicious, but it has the advantage of providing an excellent sauce - and I mean really excellent! - which can subsequently be used to lift other dishes that might otherwise be a little pedestrian. The first time of making it, I used the sauce afterwards for two other dinners: firstly with pigeon (boned and roast, and served on a bed of braised cabbage), and later on with ravioli, with a duck stuffing. Somehow, away from its original use the sauce loses any suggestion of fishiness, and becomes just anonymously good, but completely beguiling, whatever it accompanies. There's almost an argument for making  the recipe, just to have the extra sauce around for later.

1. Melt half the butter in a shallow pan, add to it the finely sliced leek, cover with water (just - you don't want it to swim), salt lightly, and cook gently for about twenty minutes, until the leek is properly soft.

2. Towards the end of the leek cooking time, melt the remaining butter in a small pan, and to this add the scallops, each sliced horizintally in half. Add the wine, and cook for a minute oir two, just until the scallops are firm.

3. Drain the leeks of their cooking liquid (but retain the liquid), and divide between two heated plates. Put the cooked scallpos on top, and then combine the cooking liquids from the two pans, add the cream, and boil down rapidly, to reduce. As soon as the sauce starts to thicken, check the seasoning and adjust as necessary, then spoon some of the sauce over the scallops, and serve immediately.

With luck, you will have a decent amount of sauce left over, to be used subsequently practically on whatever savoury dish you feel like.
Posted by Pomiane at 11:40