And the morning acqua was even more alta both than previously and, presumably, than expected by the powers that be, as we discovered when turning a corner en route to the vaporetto stop at San Zaccaria, and found the piazza ahead of us a sheet of water, knee-deep, and not a raised duckboard walkway in sight. No choice but to do a u-turn, and we made our way instead back to the Rialto, from where we went by  boat down to San Marco, and got back on track there. 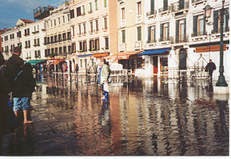 Another beautiful morning. The sun glinted gorgeously off  the one or two facades along the Grand Canal which have been recently restored to their renaissance 'bling' splendour...all garish fresco, and glittering mosaic. Wonderfully vulgar. To see the entire length of the Grand Canal decked out unashamedly like that must truly have been a sight to behold. Possibly more impressive than beautiful.

To San Giorgio Maggiore for the morning. Visually iconic, from a distance, but I'm not sure that many people actually make the hike out to see it. The pregnant armless woman from Trafalgar Square is indeed installed just to the left of the main church, gazing implacably out across the water. Not the marble original, but a much larger inflatable version, in pale lilac fabric. On the plinth was a whole load of guff about it being the sort of art which, if not looked at and forming the basis for people's thoughtful consideration, disappears into nothingness. "I wish...", I muttered grumpily, considering that there was nobody there to pay any attention to the thing.  If only I'd had a pin. Then, we'd see about disappearing into nothingness. 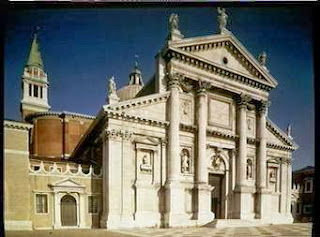 The church is sublime. Perfect. Although, viewed through eyes trained to Vanbrugh and Hawskmoor, it has a curiously secular feel. If the altar were to be quietly removed, and a few battle-scarred colours to be hung from the architraves, you could readily imagine yourself in the entrance hall at Blenheim, or beneath the dome at Castle Howard.

The Venice yacht club has its quarters on the island, and we strolled the length of the sunlit quay past moored yachts rolling gently on the water. A glass of wine and a plate of pasta at the cafe, largely deserted, with a view across the channel towards San Marco and the facades along the Riva degli Schiavoni, while the car ferry chugged resolutely back and forth before us, going between piazzale Roma and the Lido. At one point, the Technical Department took a call on his phone, and mentioned, as he checked the number afterwards, that it had come from Wembley. We seemed an awfully long way away from Wembley.

And then, on to the Giudecca, which had been our original goal on setting out. Only ever viewed from a distance, we had a suspicion that there were things there to be found and possibly an undiscovered gem, for future visits. Sadly, not so. Striking inland from the quayside, we discovered what appeared to be blocks of social housing units, all rather grim and prison-like, and a depressingly dead atmosphere that would have made even 'dour' seem like a positive in comparison with the drab dreariness all around us. The only high spot was a pilgrimage to the front gate of the Garden of Eden, with tantalising views beyond of trees and statuary...but no way of putting a foot inside -

and even the Redentore I found rather flat and uninspiring. Definitely, IMHO the Redentore comes a distinct second to the majesty of San Giorgio Maggiore. After half an hour or so, and stopping short of the Molino Stucky, we fled the Guidecca on the first available vaporetto, which took us round the bum end of the now-deserted docks (a view of unlovely industrial charmlessness), in the direction of the station. Right past the place where, years ago now, we'd once seen from a passing water taxi a police operation as part of which a low-flying carabiniere helicoptor had mistakenly sent thousands of banknotes in a swirling cloud to rain down upon the canal and the surrounding area, providing untold largesse for the local citizenry.

From the station, we set out on foot for Madonna dell'Orto, and made a complete hash of the route. Once we'd realised we were already at entirely the wrong end of Strada Nuova, and thus within striking distance of home, conscious of sore feet and a mild sense of church-fatigue, we called it a day.

Ravioli of Mortadella and Ricotta

Apple pithiviers.
Posted by Pomiane at 09:16