Glorious weather. Everything washed clean by the rain of the night before, and additionally by an acqua alta, which had the gondolieri bending awkwardly to negotiate the lower bridges, and which led to raised duckboarding in places where the streets were actually full of water (Robert Benchley, take note!) and pedestrians were invited to carry on as normal, but just three feet higher. In a side street near San Julian, the newspaper kiosk had become a little island in the middle of a lagoon all its own, and the proprietor watched balefully as all her potential customers made their way along the street, separated from her by more than the arm's length necessary for the exchange of goods and money.

The venetians seem to be a remarkably good-natured lot - they must be, I decided, as the result of my supermarket incident of the morning, when an entirely unassuming packet of minced veal flashed up a price of 1,900 euros as it was passed across the scanner. Which then resolutely refused to change its mind, as the check-out girl tried repeatedly to reverse the transaction. Maurizio was called...but the machine remained obstinate, as the queue behind me grew ever longer...then Massimo was summoned....but he initially failed to make any difference. I was starting to get impatient, but the smiles on the faces of the people behind me seemed completely unfazed. Eventually, the machine was made to see reason, and the Italian national debt was put back in its box. Smiles and good humour all round, as I paid and left, thinking that if that had taken place in London or New York, then blood would probably have been spilt by an enraged mob of impatient shoppers, wreaking carnage with their wheelie bags! 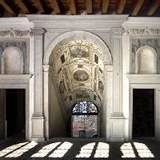 Palazzo Grimani - the one just behind Santa Maria Formosa - for several hours before lunch. Tranquil, majestic and a glorious discovery. Apart from a party of italian schoolkids, who arrived noisily, but then departed practically at the same time - not unlike a crowd of starlings, en route for Africa - we had the place to ourselves. Sun flooded the rooms, empty of all but a few paintings dotted here and there (a Titian, last seen at The Quirinale, in May, and greeted now as an old friend; a Vasari panel, which was arguably of a better standard than most of his stuff; although that isn't saying much;  two or three Tintoretto portraits; and a Roman Ganymede suspended from the ceiling of what had been the Grimani wunderkammer ). Beautiful renaissance frescoes, some in perfect condition, others merely the beaux restes (but what restes there were, were extremely beaux indeed); carved fireplaces, inlaid wall panels...it could all have been one rhinestone too many, but in fact was quite perfect. 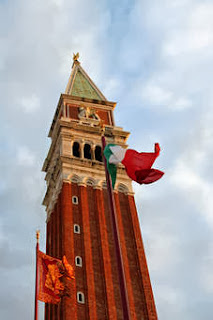 Early afternoon found us at the top of the Campanile at San Marco - a trip that has been tried before, without success..I think our timing has always been off. Clear views out over the city, the lagoon, the islands, and all the way practically to Treviso in the North and Ravenna in the South. San Giorgio Maggiore gleamed brilliantly, and beside it, rather improbably, could be seen that statue of the armless pregnant woman, which at one time occupied the empty plinth in Trafalgar Square (only, I think, this version is a great deal larger). Perhaps this is outreach by the British presence at the Biennale, which I think is still on for another few weeks. 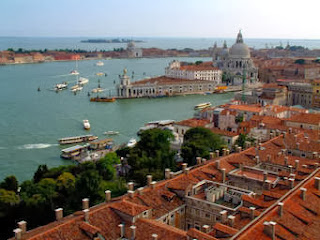 Down to ground level, once more, and we wound our way through the Piazza....surprisingly lightly populated, as is much of Venice at the moment...and thence to the Accademia bridge, in order to negotiate the tortuous route up to the Frari. It used to be on our journey from the Zattere up to Cannaregio, and so we'd walked past the Frari many times before, but never actually set foot inside. The volume is wonderful, and, behind the high altar, the tiered fenestration is striking. Canova's tomb, like the pup of some fantasy design of Boullée, gives pause for thought, with its unremitting neo-classical presence installed rather brutally in the middle of the Frari's soft gothic charm; water damage is evident up to the knees of the attendant, oversized marble mourners, however, so perhaps nature will eventually take its course. The art in the place is not wonderful - everybody raves about the Titian altarpiece, but I've seen it before, up close, and I don't actually like it much. There are some good-ish Vivarini's, and a good Bellini altarpiece in the sacristy; in the chapter house, with its pitted red and white checkerboard floor and the smell of many generations of beeswax, is a lovely Veneziano, which alone would justify the visit. A glance at the heap of long-dead roses tossed through the bars onto Monteverdi's tomb, a sideways glance (in astonishment, largely) at the Pesaro mausoleum, and we were back out once more in the square outside, the late afternoon sun disappearing behind the rooflines, and the thought of tea and biscotti at home putting paid to any idea I might have had of also fitting in a visit to Madonna dell'Orto before the end of the day. 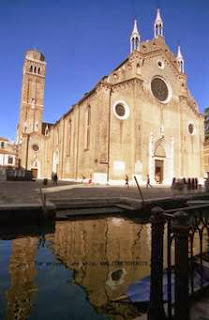