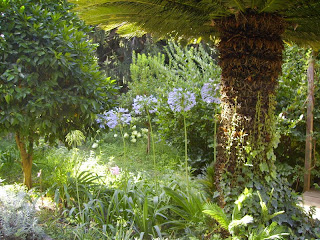 Coming downstairs, early yesterday morning, for the first time in months there was a chill to the air, and I was prompted to close the doors into the courtyard, which have been standing open since June. It rained last night, leaving pools of water on the entrance walkway, and a freshness which, although envigorating, speaks more of early autumn than of the depths of summer. The sun is warm, but no longer baking. 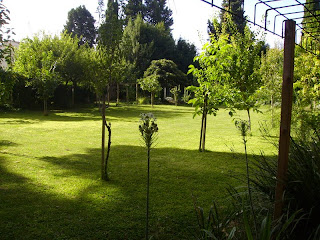 It's been blissful. Endless days ...weeks...of unbroken sunshine...a rhythm of siestas, and candlelit dinners, al fresco and late...early mornings working in the garden, the lawns washed with clear, strong  sun, and again in the evening, as the shadows lengthen and the sprinklers drench everything with hundreds of gallons of water. Individual days dissolved into a lazy refrain of sleeping, and working, and eating, and sleeping....waking, occasionally to wonder whether it was six in the morning or six in the evening, and it being not particularly important, in either event.

We have a last burst of summer social activity - three dinner parties and two different sets of houseguests, all to host within the next week - and can then subside, I hope, into a gloriously mellow autumn. 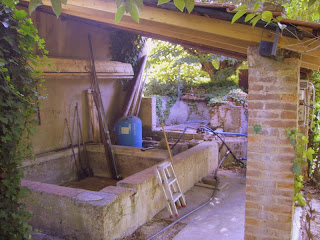 Parma Ham and Melon (the melons smell so irresistible at the moment, that I have an immediate menu-readjustment as soon as I get near them!)

Plum and almond tart.
Posted by Pomiane at 09:57