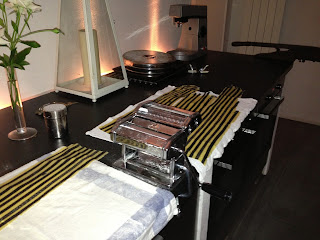 My starter offering in this year's Masterchef weekend - which was about a month ago...but which hasn't been blogged before now due to general levels of inertia as the result of stultifying heat over the past few weeks!

Striped pasta is an idea which came (for me, at any rate) from the Simili Sisters, a couple of leathery old bats from Bologna, whose lives are devoted to pasta and to sharing their devotion with the rest of the World. Their aesthetic sense looks to have stuck somewhere around 1967, and their version of striped pasta is a 'cheerful' evocation of the flag of Italy, with stripes of green, orange (ish), and white (ish); I decided to adopt their method, but took a more post-modern approach, and went instead for good old Black and White. Once you know how to achieve the various different colours available in fresh pasta, then the World is your oyster. For obvious reasons, there's little point in using the sheets of pasta for anything which involves them being cut into narrow strips (fettucine, or smaller) or where the pasta disappears under a blanket of sauce (lasagne, for instance). For large 'stuffed' (tortelloni, agnolotti, ravioli) or for dishes where the pasta is cooked and served as large squares (which seems to have as many different names as there are regions across the whole of Italy), then this works perfectly. For masterchef, I made large triangular ravioli, with a stuffing of salmon and tarragon, and served them with melted butter and a sprinkling of bottarga.

1. Make the 'white' pasta, by combining all ingredients in the food processor and working it for the thirty seconds it takes to consolidate into a ball; knead the dough briefly on the work surface, and then put in the fridge for about an hour.

2. Ditto with the black pasta ingredients.

3. For generous servings for three people, use only half of the white pasta dough, and a quarter of the black pasta dough.

4. As per normal practice, roll each of the two doughs ten times at the broadest setting on your pasta machine, then put each one through the machine decreasing the settings as you go, until you have reached the mid-setting on the machine (different machines vary on the number of different thickness-settings they have....my machine in Italy has nine, and the one in London has seven). For me, this means rolling the dough until setting number four. You will probably need to divide the dough as you proceed in order to keep the lengths manageable for putting through the roller.

5. Once both doughs are rolled to mid-thickness, lay the strip(s) of white pasta on a floured surface or flat cloth. Cut the black strip of dough into thin strips (either by hand or using the fettucine cutter on the pasta machine), and then carefully lay the black strips, spaced evenly apart, on top of the white pasta. Using a rolling pin, once the strips are in place, gently press down along the length of the strip and pass the rolling pin lightly, a couple of times, over the dough, to ensure that the black and white doughs are properly attached to each other.

6. Pass the amalgamated pasta through the roller on the machine, and continue as normal, decreasing the thickness with each roll, until the pasta has gone thriugh the thinnest setting.

And that's it. Therafter, use as you would any other pasta. The theatrical effect is excellent - and even the italians are impressed! 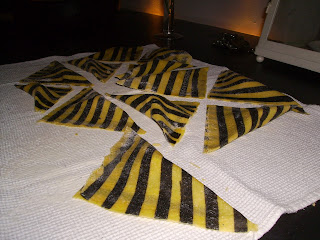