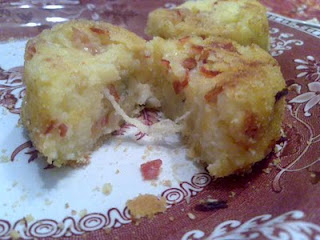 On Tuesday, we went to the Pauli for a last-of-the-year-outdoor dinner on their terrace. Although the days are sunny and still quite hot, evenings are distinctly chilly, and although we can probably manage to eat in the courtyard at Santa Caterina for a couple of weeks longer, the Pauli's terrace is on the third floor, with admittedly panoramic views, but it catches the evening air. The four-footed came with us, as we realised that he has never actually been alone in his entire life, and it seemed a doubtful moment to try leaving him on his own for the evening. As it was, he behaved impeccably, and, having politely accepted the champagne cork to chew at the start of proceedings, he curled up quietly under the table and kept my feet warm throughout.

It was a mozzarella dinner...which meant that we ate mozzarella. And almost exclusively mozzarella. A grateful ex-patient from Calabria regularly sends them a case of beautiful, soft, creamy mozzarellas (maybe half a dozen at a time), which have to be consumed practically on arrival, before they lose that wonderful texture and flavour. And as a side dish, we were served slices of Gattò, which is a traditional neapolitan dish (presumably a bastardisation of 'gateau') and comes from the french influence in Naples in the eighteenth century.  Not to be confused with Gatto (without the accent), which would be a four-footed feline.

The secret to a good Gattò is the spiciness of the cheese and meat which are stirred into the mixture - best of all would be Nduja, which is an extremely spicy calabrian sausage, but which is almost impossible to find outside southern Italy; chorizo is a good substitute.

Normally, Gattò is made as one large thing, but made in individual ramekins and unmoulded, it presents well as an individual starter.

Ingredients: 30g Butter (plus some extra, to butter the ramekins); half a cup of dry Breadcrumbs; 3 medium-large Potatoes; half a cup of Milk; seasoning;  1 Egg; half a cup of grated Parmesan; generous pinch of Nutmeg; 50g Chorizo; 50g Gruyère; 100g Gorgonzola piccante.

1. Butter the insides of four ramekins. In order to help with final unmoulding, I then usually put a double strip of foil, folded to about a centimetre width, across the base and sides of the ramekin, with the edges hanging over the sides of the ramekin; butter the ramekin again once the foil is in place, to ensure the foil strip is also buttered. Once this has been done, then line the ramekins with the dry Breadcrumbs.

2. Cook the Potatoes in boiling salted water until done - approx ten minutes - and then pass them through a potato ricer (no need to peel them beforehand, if using a ricer; if mashing them by hand, then you will have to have peeled them first). Return the mashed potatoes to the pan, add Milk, Butter and Egg, and stir constantly over medium heat as these ingredients are amalgamated thoroughly into the potato. Check seasoning and adjust as necessary.

3. Dice finely the Chorizo and Gruyère, and stir these into the Potato purée, along with the Nutmeg and grated Parmesan.

4. Fill the bottom half of each ramekin with this mixture, then cut the Gorgonzola  into large dice, and distribute these between the ramekins, making sure that the Gorgonzola sits in the centre of the ramekin, and doesn't extend to the sides - you want to end up with Gorgonzola entirely enclosed in Potato mixture, so that the cheese doesn't leach out as it melts.

5. Fill the ramekins to the top with the remaining Potato mixture, then bake in a 200 degree C oven for about  fifteen minutes, until the tops are browned and you judge the ramekins are heated through.

Unmould to serve.
Posted by Pomiane at 08:24

That looks and sounds just my kind of thing.

Sounds scrummy, and I'm sure my 4-footed feline gatti would love it too.