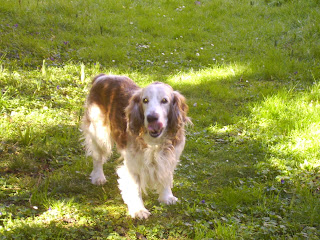 This morning, we said a last goodbye to the Senior Four-footed. After two weeks' respite, his cortizone pills stopped working properly on Thursday, and by yesterday his lymph nodes were so swollen that he was having trouble swallowing food and his breathing was noisy and rasping. We'd always known that he would indicate when it was time to go, and he did...in the afternoon, he sloped off into the garden to find somewhere quiet and private where he could lie, in amongst the bamboo, and be on his own. Clearly, it was time. And so we called the vet, who came to the house this morning and put him to sleep. He'd had a good, long life...he didn't suffer...he was ready to go...it was as good a leaving as one could have hoped for...but it hurts horribly, all the same, and we're both feeling slightly stunned.

Scuffle has been part of everything, for so long. It seems like three lifetimes ago that he first arrived. At that time, we hadn't yet packed up and moved on from Greece...I still had not one but two globetrotting work existences ahead of me...Pisa wasn't even a glimmer on the horizon in anybody's future planning...and Scuffle has been there as part of the landscape during all those life-changes. Either there directly, or there to come home to...lovable, soft, cuddly, caring, concerned (when appropriate), generous, insistent, opinionated ...and present.

Early on, he perfected his 'I want' stance, when he would present himself, chin planted firmly on the knee of whoever, in order to gain attention, and then fix them with an intense and meaningful gaze which said, beyond any doubt, 'I want...' More often than not, 'I want' was a request for the inside of his ears to be scratched - either that, or the intense pleasure of the ear scratch that he generally got drove everything else from his thoughts - or, if it was close to five p.m, then 'I want ' was a reminder that it was four-footeds' dinner time. Bosun rather relied on Scuffle's inner clock, in that regard, and on occasion Bosun could be seen fixing Scuffle with a beady eye that strongly suggested it was time Scuffle did his 'I want' thing and got the show on the road. Not always so trivial though, and one of his more anguished 'I wants' was in the period after Bosun had suddenly died, and Scuffle grieved, and didn't understand why his mate was no longer around - one evening, as we sat at dinner, he came and did an 'I want' to the Technical Dept (his boss)...and it was perfectly clear that he was saying 'I want you to make everything right again'. There was no way we could explain to him that we were at least trying to...but when, about a  month afterwards, the new puppy arrived  Scuffle was delirious with excitement  ("Oh...My...God! I have always wanted one of these!" was the approximate translation of his thumping tail and excited eyes, as he nuzzled and investigated the wriggling and slightly confused new arrival)... and then, a day or so later, there was a new, slightly worried,  'I want' , again addressed to his boss, and this time it was 'I want confirmation that I'm still the Most Important Dog'. Which of course, he got. Because, of course, he was (we just kept it quiet from the junior four-footed, who anyway had his own opinion on the matter).

Memories of Scuffle: falling in the swimming pool in Florida, within two minutes of arriving there as a small puppy, and thereafter giving the swimming-pool-demons a careful and very-wide berth; ram-raiding picnics in Kensington Gardens on summer evenings (he and Bosun worked a very effective pincer-movement...and by the time I realised what they were doing, it was generally too late for anything other than discretion to be the better part of valour, and so I pretended they were nothing to do with me - there's no point in trying to argue with a dog's primal instinct in relation to cold roast chicken, laid out invitingly at ground-level); early morning romps amongst the bedclothes, after four-footeds had had their morning milk, and the two-footeds were indulging in morning tea, and the Today programme; being expelled (along with Bosun - it was an equal-opportunity disgrace event) from dog-walking group in Battersea for being generally badly-behaved; falling in the Arno, one wet and muddy January afternoon, and his boss - wearing white trousers I recall - having to haul him out, before we all trudged soggily and silently home; rolling ecstatically over and over in the scent of the freshly-mown lawn; insisting on saying 'Buongiorno' to every dog and every person he encountered in the Piazza in the course of his morning constitutional; trying to steal the junior four-footed's dinner, on a daily basis, without anybody noticing; glancing up with one of those and-perhaps-some-for-me? looks, every time he noticed cheese being taken out of the fridge;  and the memory that was especially and exclusively his...those times when he saw the 'come here' sign that he'd learned at puppy training classes all those years ago...hands clasped together over one's head, which he could recognise from 150 yards away, and always had him racing delightedly forwards, tail wagging, ears flapping, eyes gleaming, because he knew that was his own, personal call-sign, and that you wanted him, especially and exclusively. In some ways, it encapsulated all of the answers to all of the 'I wants' there ever had been or ever could be. 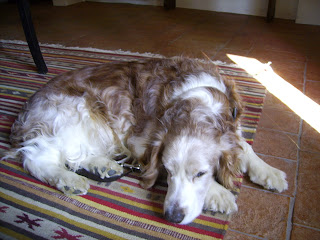 Oh Pomiane. What a lovely tribute. He sounds a very special dog. But what a tough time for all of you - even with the good departure and the lovely memories. It never gets any easier that they go before us, does it.

He was...and remains so, for as long as we hold him in our hearts. And no, it doesn't. But then, I know you've been through it yourself, as have we, before now...so you'll understand how I still see him, out of the corner of my eye, lying in one of his favourite spots in the kitchen or at the head of the stairs...just 'being there'. At the moment, though, we're trying to keep the (erstwhile junior) four-footed sufficiently occupied that he can get used to the change, and work beyond just feeling confused. We'll get there; but grieving takes its own time. Thanks for your message.

I am so sorry to read this news, I feel for you all. But you have a lot of happy memories so he will live on.

True. And, since we suspected for some time that his days were numbered, then there were lots of opportunities to say goodbye properly, along the way. Still bruising when the moment comes...but its something we all have to deal with in our lives.