...from the rain. Days on end of it. And yesterday, being May Day, and a public holiday, it redoubled efforts, and bucketed down the entire time. So, of course, this morning (not a public holiday) dawned clear, bright, and sunny. 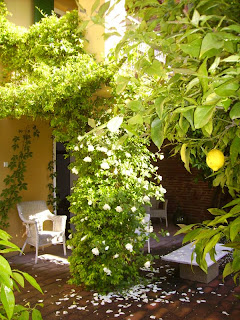 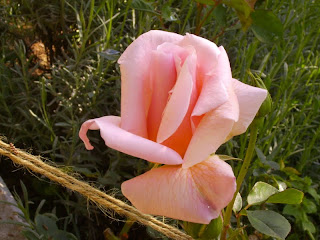 The rain must have carried on late into the night, as the garden was still dripping when I took the four-footeds out first thing, and drops of water glistened in the sunlight across the shrubs and the lawns. And the garden, of course has loved it....in general, I think I've never seen it happier, after the cold weather in February despatched hordes of evilly-intentioned bugs, and then weeks on-end of glorious rain has soaked into the ground. There are thousands upon thousands of buds on all of the roses... 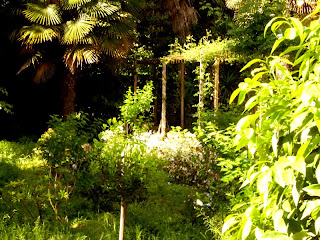 ..the bearded irises all fat with promise..jasmines already heavy with blossom, and trachelospermum about to break out in carpets of flowers... 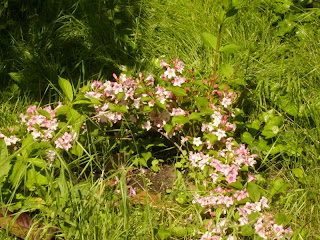 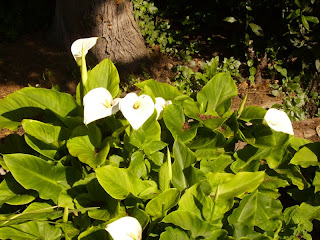 We think (for which read 'fingers crossed') we've found a prodotto which deals with rose chafer beetles, those little b******s which last year chewed most of the roses into tatty oblivion as soon as they flowered. I freely admit I am not a green gardener, although I'll happily try the 'green' option as a first go at any garden blight. But thereafter, if the problem persists, I'll reach for the industrial product with no hesitation whatsoever. Which is why I dutifully watered nemotodes into the lawn last year, as the politically correct method of dealing with chafer bugs. The Technical Department thought it the extreme of emperors-new-clothes, as in fact it was difficult to see that there was actually anything inside the nemotode container before dutifully adding water to the watering can and carefully watering diluted air into what I thought were the affected areas. Complete waste of time, of course, as we came across our first chafer bugs several weeks ago - exactly at the time one would expect them -  and so sought help from that nice chap with the limp who runs the vivaio up at Gello. Bingo! Or, so it turned out. After last year's failure, I was sceptical, but dutifully made the first application to the entire rose population in the garden about ten days ago. And for the past week, the only chafer bugs we've been picking off the blooms are either dead or very nearly so. And not a shredded rose bloom in sight! 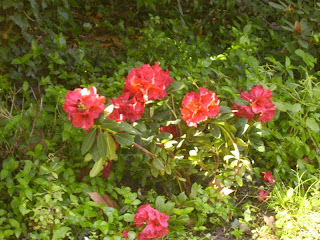 Oh, and it isn't entirely un-pc, as, used carefully, it apparently shouldn't have any harmful effects on the bee population either. Which matters.
In Italian, the stuff is called 'Axoris Concentrato', and the active ingredient is something called thiamethoxam. Having been in despair about these foul pests, this time last year, and found many other people on the web similarly at a loss, this has been a major discovery!

So, we're now due several days of sun, which will mean weed-pulling on a grand scale. The noxious things sprout prolifically in the rain, but with the advantage that as long as weeding takes place soon afterwards, they pull out of the wet ground as though from softened butter. 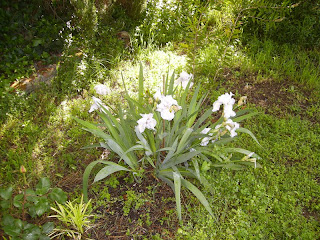 And the other thing at the moment, of course, is the scent. For several weeks, as the barn was garlanded with wisteria, we had that heady smell wafting over the terrace....and as that has passed, the smell now is of orange blossom, both from our own trees outside the office window, as I sit here at the machine, but also the scent which wafts in downstairs from the trees which hang over the garden walls on the other side of the lane. And the scent of jasmine coming in from the courtyard, outside the dining room windows.. and the heady smell from the roses, which are starting to bloom thickly on the entrance pergola ... 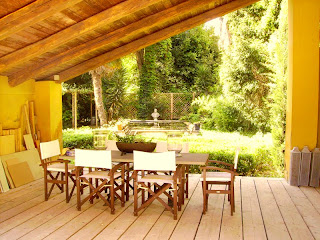 Phyllo Tarts with Chicken Livers and Mushrooms, in Marsala Cream

I haven't had an email from you advising of a new posting for quite some time, not since, in fact, I had been invited again to read your blog. Should I sign up again for these emails?
It has been interesting to catch up with you, nonetheless!

Having read this post a little more slowly, I looked up the Rose Chafer Beetles. My, they are handsome chaps, but deadly to your Roses so I understand that they have to go.

I am so envious of all the different perfumes being tipped into your garden, I haven't even a small Lilac tree.

Well, if in search of the most fragrant roses imaginable, I can recommend Alec's Red (produces large single stem flowers, with a scent quite beyond description, and flowers throughout the summer and well into the autumn); Margaret Merrill; Countess of Wessex (iffy name, but a beautiful rose); and Anna Pavlova...all of them absolutely wonderful. And I'd recommend getting them from Trevor White Roses (google them to find co-ordinates). I used them for the first time in the autumn for the nes roses for the pergola, and the roses were half the price of Beale or Austin, and the healthiest specimens I've ever seen!

Just doing some belated catching up on my favourite blogs - thanks for the roses suggestion - can never have too many. :) I know what you mean about the rain. Unfortunately here the weeds have won and now we're drying out so not so easy to remove them. But we've rain promised for most of this coming week (aaagh) so no doubt they'll be even taller and more lush but also easier to remove!

Thank your for the Rose recommendations, I shall ask my gardener to get some after he has made space in what now looks like a veritable, though tiny, jungle.