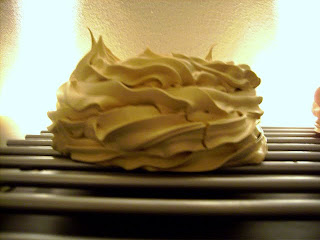 I was recently given a copy of the Ottolenghi recipe book, and although I confess I wasn't immediately grabbed by the contents in general (although I might come back to it at a later date, and discover riches beyond the dreams of actresses...you never know), I was struck by what, to me, was a novel way of making meringue. So, with only minor adaptation, I tried it. To great success.
Not for the faint-of-heart, or for anybody concerned about calorie intake - the amount of sugar in this recipe is rather alarming! -  this is definitely something for those occasions when you want a theatrical flourish, and can banish thoughts of the waistline to the following morning. The density of the meringue mixture is such that you can build a towering structure which will retain its shape perfectly as it cooks, with no worry that it might spread or topple or do any of those irritating things which are so depressingly familiar to cooks.
Another surprise about this particular recipe is the prevalence of the flavour of cinnamon, despite only using such a small amount of it. On this occasion, I filled the meringe nests with creme fraiche and raspberries (to balance the inevitable sweetness of the meringue itself), both of which have quite strong flavours ...yet the lasting sensation at the end of it all  - subtle, but certainly there - was of the cinnamon.
Apologies in advance to those of you who don't have a stand-up mixer. Ottolenghi says it isn't possible to beat the mixture hard enough or long enough without one, and that it just isn't possible to do it properly with a hand mixer. I can't comment - I wasn't interested to disbelieve him, so I didn't try.
For two large 'Nests'.
Ingredients: 100g egg whites; 70g Muscovado Sugar; 130g granulated Sugar; quarter teaspoon of Cinnamon.
Method:
1. Heat the oven to 110 degrees C.
2. Put the egg whites and the sugars into a simmertopf or bain-marie, and heat gently for ten  minutes or so, stirring occasionally, until the sugars have dissolcved into the egg wite, and the mixture has reached about 45 degrees C.
3. Remove the egg-white/sugar mixtur to the bowl of a stand-up mixer (Kenwood, KitchenAid....whatever you have), and beat at high speed for eight minutes. It will firm up and increase in volume dramatically.
4. Fold into the mixture the Cinnamon, then put everything into a piping bag (I always piped meringue using a 'ribbed' nozzle, but that's just personal preference), and pipe two nests onto a baking tray lined with either greaseproof paper or a silicon mat.
5. Bake for between one and a half and two hours. Allow to cool, and preferably use on the same day as baking. 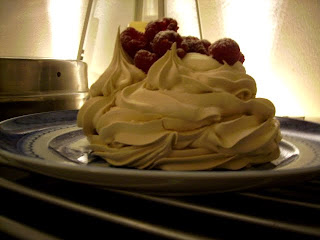 Is that the Swiss method? I think the Italian method uses sugar syrup beaten into foamed egg whites?

Well, it isn't entirely either method - perhaps closer to Italian than Swiss (and certainly, the end result avoids the dry, explosive crumbliness that the Swiss method often produces, and is rather agreeably chewy by comparison). In my experience, though, uncooked italian meringue doesn't have the degree of firmness which this method produces, and which makes it such a good element for building shapes that might otherwise be rather precarious.