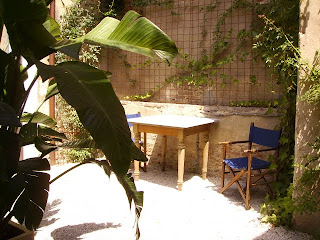 ...from the current heatwave in Tuscany. The last couple of weeks have been unbelievably - and increasingly unbearably - hot! The Belforte's passed by for dinner a couple of nights ago and reported that the temperature on Monday in Colle Val d'Elsa (their local market town) had reached an unprecedented 44 degrees. 'In a hill-town in Tuscany', they said, with incredulity in their voices...and we all shook our heads in disbelief, wondering whether that might actually have been a breath of evening breeze that we'd just felt. Which of course it hadn't been...
Too hot to type; too hot to garden; too hot to cook; too hot to do anything apart from collapse into heavy sleep, for hours each afternoon, and through the night. We leave the doors and windows wide open 24/7 (burglars, take note) to try and encourage airflow, and we keep the shutters closed during the day on the sides of the house which take direct sun. And evenings - which paradoxically are already getting shorter, so it's not possible to do anything beyond 8.30 - are spent in complicated manoeuvres trying to ensure that all of the garden gets sufficient water to keep it going through until some rain arrives once more (which is variously promised for sometime around the end of next week...but will then worryingly and inexplicably vanish altogether from the forecast without warning, from time to time, just to tease). For this weekend, while we're away (back to the inferno on Monday  - although I see by then temperatures are forecast to have dropped to the upper twenties, only) we've left the place festooned with hosepipes, rigged up into a series of temporary watering systems attached to timers. Some plants might struggle...but frankly, in extreme conditions like this, it's a matter of sauve qui peut!

And here in La Rochelle (on the French Atlantic coast) it's been the coldest summer in years. We had two days of 32°C, but other than that we've barely broken 22°C since the end of April. Maybe we could arrange some sort of heat-sharing system?

Mind you, after living for years in the New Mexico sunshine, with the consequent effects on British skin, I'm not too sorry to have had a largely sunless summer!

The best place to be I should think. I don't envy you those temperatures.

And after three days of grey, gloom and rain (and sweaters!), I now feel sufficiently rejuvenated to get back to summer in Italy.