We've been regresssing, this summer. I think it began when we 'adjusted' the access to the courtyard, in June, and suddenly found we were using it much more often than before. Bizarrely, we were both struck by how reminiscent it was of the small courtyard in the first house we lived in in Greece, in the Seventies....something to do with the shape, and the whitewashed walls, and the beautifully 'hidden' quality of the place (and although the presence of a stonking great thirteenth century church forming one wall of the courtyard ought somehow to diminish the similarity, it doesn't manage to). The fact that Esselunga were running a BOGOF promotion around that time for FAGE yoghurt was another factor in the equation, and before we knew it, a habit had developed of bowls of greek yoghurt (sprinkled with hazelnuts and raisins, and liberally drizzled with honey) to accompany coffee, taken in the courtyard each morning at around 10.00. The habit took hold, we became firm devotees...and then Esselunga finished their BOGOF. Scottish genes being what they are, I revolt at the thought of paying one euro thirty for a pot of yoghurt, and the only alternative was to see about home production. And discovered that it couldn't be easier. The fact that UHT milk can be bought, ready sterilised, in screw-top containers is an enormous help, since it means that all you need do in terms of preparation is introduce (with the aid of a scrupulously clean coffee spoon) a couple of tablespoons of yoghurt into the milk container, replace the lid, and shake.

Anyway, the actual steps are as follows:

1. Add a couple of spoons of yoghurt to a litre of UHT full milk; try and ensure that no air remains in the container before you replace the lid, as this can swell during the process, and might cause problems if it swells too much.
2. Shake the container, to combine the yoghurt and milk, and warm for seven hours at around 43 °C. The best place to do this is in the warming drawer - if you have one - of the oven; failing that, it also works if you heat water in a deep fat fryer to the right temperature and then immerse the milk container in that.(The warming drawer is preferable, though, since it allows a number of containers to be processed at the same time). Do NOT allow the temperature to go above 55°C, as the yoghurt culture won't survive at that temperature.
3. After seven hours, place the containers in the fridge for about a day (from the afternoon of one day, they'll be ready for consumption the following morning), and then strain them through fine cloth (I use a linen napkin, placed inside a collander over a bowl) for about an hour, in order to achieve the thickness of traditional greek yoghurt. If you want a thinnner, runnier version - the sort appropriate for indian cooking - then strain for less time.
That's it.
I believe the yoghurt will keep for up to a week, or so - but not in this house! TD calculated that the home made yoghurt came out at a fifth the cost of the commercial version (not including the cost of the electricity for the warming drawer) - but that you then have to reduce that saving by 50%, as we eat twice as much of it at each sitting! 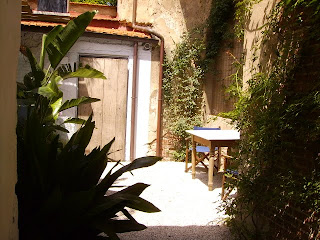 An easier way to do this: Boil 1 liter of UHT milk,while stirring regularly. Let it cool until you can kep your finger in it for 8 to 10 seconds. Add 2 tbls of bio-yoghurt, put cling foil over in and wait 8 hours. That's it. You can use a linnen cloth as Pomiane does to make it thicker. In Holland we call it 'hangop'.

I'm not convinced that's 'easier'(seems to me that boiling a litre of milk, stirring regularly, and then having to check that it has cooled down sufficiently to proceed takes more time than just putting a container of milk in a warming drawer)...but it is at least an option that requires neither an oven nor a deep fat fryer, so certainly an additional method. I must check with the Belforte's (who are half dutch) about 'hangop'; it's an entirely new one on me.