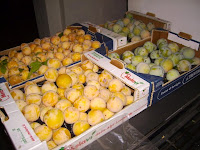 The Plum and Greengage season is upon us, with a vengeance. Thousands upon thousands upon thousands of the things, and all - helpfully - at the same time. Paola has come and picked (industrially) three times, and I've been pressing bags of fruit on anybody who stands still for long enough not to avoid it. Still, the branches are loaded, and I'm afraid I'm just going to have to leave the remainder for the birds. Part of the problem is that there isn't actually a great deal to be done with them, once picked...they've gone into ice cream, and tarts, and bavarois, and fruit salads, and even been used to make daiquiris. But unless you want to go the 'chutney' route, which I don't really (the fruit/meat combination isn't something that works for me), then the options run out fairly quickly.
One delicious way of using them - either plums, or greengages - though, is baked in a crisp tart shell, on a bakewell tart base. Good with plums, and even more delicious with greengages. The recipe comes from Jane Grigson (who seems equally stumped when it comes to breadth of uses for fresh plums) and is definitely one to be repeated as often as you can get the fruit for it.
For an 8" diameter tart.
Ingredients: shortcrust pastry made with 125g butter, 150g flour, 50 ml water and a pinch of salt; 100g ground almonds; 100g melted butter; 1 egg; 100g sugar, half tsp almond essence; sufficient greengages that halved they will properly cover the surface of the tart.
Method:
1. Roll the pastry into a greased false-bottomed 8" tart tin, and blind bake at 180 degrees C. Allow to cool slightly
2. Combine all the other ingredients apart from the greengages, and mix well with an electric beater. Pour into the blind baked shell.
3. Halve and stone the greengages. If they are still hard, then poach them briefly in a very little water and a spoonful of sugar, just until they soften. If they're properly ripe, you shouldn't need to bother with this stage. Be careful if you are poaching them not to let them go too far,  as the appearance of the tart will be compromised if the greengages are a soggy mess!
4. Place the greengage halves, skin side up, on the almond base, arrangeing them pretty much to cover the surface of the tart. Bake for about half an hour, until the almond mixture has risen and puffed around the greengages. remove the tart from the oven as soon as the almond cream begins to brown.
5. Serve either warm or cold. 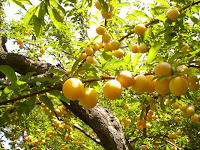 Would it work as a liqueur if your added them to a spirit such as vodka? Years since I ate greengages straight from my uncle's tree. Happy days.

It's the stones you use for that, rather than the flesh...so not a lot of use, given that I normally put the stones into the gash grinder. There was a memorable dinner we hosted once in Greece, where we flavoured each bottle within a crate of vodka with different flavour-elements: garlic; apricot; cherry; tarragon...etc, etc. Some people at the dinner never spoke to each other again as a resultof that evening....I , on the other hand, remember it as being rather blissful.

Your story made me laugh, you are a wicked man with a marvellous sense of humour.

Yup, that too. I just forgot to include it in the list...

I've long enjoyed reading your blog and yet strangely it's this post that moves me to comment...
You wouldn't consider jam? It's not quite as sophisticated as your posts suggest your dining usually is. But surely everyone has toast and jam at some point in the year. Or I'd make a plea for considering a spiced plum chutney, nice with cheese as well as meat.
They freeze ok too. I am jealous of your harvest, not having a garden or similar. I'm one of those people looking keen when people mention having gluts of this or that!

Well, you know, I would. And in fact, I've been promised my grandmother's jam-making pan, as long as I trek to darkest Kent to collect it (which I will, around the end of August). Toast and jam is very definitely on the agenda, whenever we have houseguests and therefore sit down properly to breakfast...even more so since I bit the bullet at the start of this year and started to make my own bread. Watch this space...