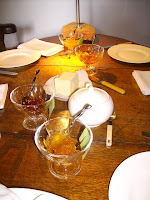 I don't make marmalade - I never have. Up at Brancoli, though, it's practically a cottage industry, and each year's production is eagerly awaited by households the length and breadth of Tuscany. It came up for discussion over dinner one evening, in January, when our bitter-orange trees were heavy with fruit, and I airily suggested that perhaps Brancoli Inc might like to include a 'Santa Caterina' line this year, if we supplied them with the fruit to do so. "No', was the firm answer to this one - Brancoli would not be interested to do any such thing. 'Make your own!'.
However...several glasses later, and after a heated (and, on my part horrified) discussion about whether or not an 'interesting sounding' marmalade recipe should be tested from the awful Delia, we found ourselves out in the garden, in the rain, picking oranges by torchlight. It sounds like some kind of mystic ritual, but was more a question of striking while the iron was hot - by the cold light of day, enthusiasm would have waned, and the Santa Caterina marmalade would never have made it beyond outline sketches on the drawing board. 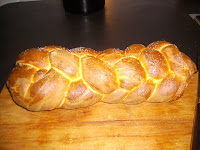 As it was, a blind tasting was talked about for when the production line had done its stuff. And last Monday was the day! 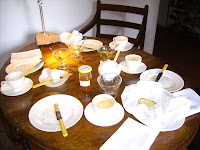 Four different marmalades to choose from: the Brancoli method using their own oranges; the same, but using ours; Brancoli oranges and method, but 2010 vintage; and finally, Brancoli oranges, but using Delia's method. Nail-biting stuff, as there was a risk that I could have ended up saying that I actually liked Delia's version...which would have been beyond appalling. Each marmalade was decanted into an anonymous serving glass, and labelled only numerically. I'd  made a six-braid zopf to supply the toast we required, and we got stuck in. We did 'spoon' tests, to see if a spoon would stay upright in each marmalade (it did), and a colour comparison: number 2 was very dark; number 3 was refreshingly clear, and the shred in that one was also particularly well spaced. Number 1 seemed very high in pectin, which made it look slightly cloudy...but the flavour was extremely well-defined. We tasted, and considered... and a second round of toast was called for. We gave our scores....and the identities were revealed. 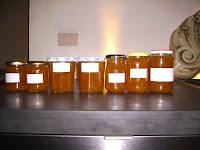 Nobody gave Delia top marks - although, I confess, I did quite approve of the strong flavour; Technical Dept was quite damning about it, though, and said the method clearly overcooked the marmalade and it came out like orange-flavoured caramel (Way to go, TD!). He ended up giving top marks to ours (fortunately) and lowest marks to Delia; I gave highest rating to this year's Brancoli oranges...but was more than delighted to receive a year's supply of 'Santa Caterina' marmalade at the end of the whole process.
By the end of which period, I suspect I'll be pushing my luck if I think Brancoli might continue its Santa Caterina line into 2012. Time to research marmalade recipes of my own, I fear...
Tonight's Dinner:
Flamiches
Roast Lamb; sautéed Salsify
Lemon Soufflés
Posted by Pomiane at 10:06

Good grief, nothing for weeks then three at once. I shall have to digest these later today. Marmalade, hmm...

Yes...you're not the only one to complain. Gardening and breadmaking in Italy has been pretty much full-time recently...Easter bank-holiday weekend in London has given me a chance to catch up!

I've got a friend who makes homemade marmalade. It takes some work from what I hear. At least my husband and I get to enjoy his labors :)

Yes, I think you're right. When I was airily (and ignorantly) opining that it was probably like making bread or puff pastry, where there are bouts of activity for a few minutes, followed by a pause of an hour or so, which is a very efficient period within which to polish off some gardening chores, I was informed that no, it's nothing like that; you have to stand there, and stir, and watch...which IMHO is pretty heavy duty.