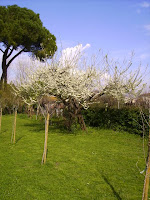 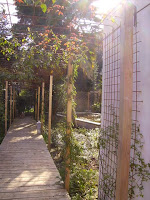 A glorious day. Warm sunshine on my back, as I weeded round the bearded Irises, before giving them their annual feed of phosphate...Almond blossom is over, but now plum blossom is at full strength, and the peach blossom isn't far behind. Apricot blossom - arguably, the prettiest of the lot - is just beginning to stir, and the roses are putting on new growth at a rate of knots.
The new planting for this year is just about completed, with the camellias and azaleas that went in last week rapidly followed by a whole lot of hostas and hemerocallis, which I'd ordered from a supplier in Rimini back at the end of January, and which unexpectedly arrived only a couple of days ago. With no fear of any further frosts, the more tender of the water lilies, which had to go indoors for the winter, have now been returned to the lily pond - although the temperature of the water is still cold enough that I didn't linger over the process of 'planting' them once more, but did an extremely quick in-and-out. 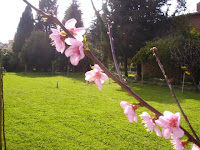 After a soul-enriching afternoon spent with wheelbarrow and hoe - with demands from the junior four-footed every two minutes that I throw for him the pine cone that he carefully placed in the middle of whatever I happened to be doing at the time, just in case I might miss it - tea was served beside the fire in the barn. As we sat,  the sky got darker and darker, in readiness for what felt like the first of the summer thunderstorms. Which I love. The heavens opened, thunder rolled and crashed, and I retired to a long hot bath, in the company of Elizabeth David ('Spices, Salt and Aromatics in the English Kitchen' ), as flashes of lightning periodically split the darkness beyond the bathroom window... 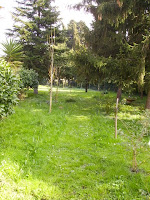 We are still quite a way from your spring. The blossoms are only just emerging on trees, with Blackthorn being in the lead. I hope you'll post pictures of your garden when in bloom.

I haven't seen a thunderstorm in years, I am envious.

The thunderstorms here are glorious, and plentiful. Something to do with being between the hills and the sea, I think, so the two weather patterns collide, with wagnerianly dramatic effect.