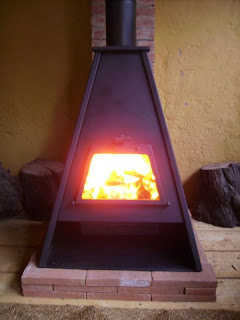 We have fire!
Giancarlo emerged from his year-end hiatus, a couple of days ago, and neatly and efficiently installed the wood stove in the barn (where it has been idly waiting for the past few months, looking pristine and splendid...but not actually attached to a chimney). It works wonderfully, and although primarily intended for use during the shoulder months of the year...drinks in front of the fire in November, for instance, or afternoon tea in March...we resolutely lit it each afternoon this week and sat before it being very British and 'outdoors' in the middle of winter, hugging steaming mugs of tea and commenting to each other on quite how warm we really were.
The four-footeds were less impressed, and ignored the fire entirely...but they raced around anyway, on the basis that anything 'al fresco' seems like cause for a celebration. 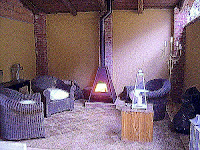 Tonight's Dinner:
Scallops with Almonds, in Parsley sauce.
Raie au beurre noire; new potatoes (yes, we are in London for the weekend, and I have been down to Les the Fish, in Bute Street)
Raspberry Tarts.
Posted by Pomiane at 16:03

That all looks very civilised. The fire seems to be working wonderfully well.