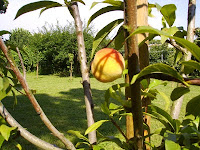 Christian - who was staying with us for a couple of days last week - remarked of some friends of his who live in Galicia that 'they do more work in not-working than anybody I can think of'. It's a concept I can relate to (occasionally).

This week: Monday was the latest (and last before the autumn) round of heavy-duty planting, with new poplars, silver birch, sorba, cypresses, arelias, pieris japonica, and black bamboo; Tuesday, Brancolis came for dinn

er, which was splendid and late; Wednesday, we flogged down to Torre Mozza outside Piombino for lunch, as something to do while Christian was here which wasn't either cooking or gardening; Thursday, we collected the tiles for the new kitchen in Via Fucini, and sorted out the details for the new french windows for the first floor terrace at Santa Caterina; Friday was weeding, and watering, and mowing, and hacking-and-slashing in general in the endless process of trying to wrestle the garden into submission. (In fact, the garden is behaving well at the moment, with many things in bloom: roses, delphiniums, hemerocallis, agapanthus, water lilies, verbenas, and some late deutsias...)

We now have high summer. Blissfully hot, day after day, and already town is subsiding into summer somnolence, listless and exhausted in the heat of midday, and returning to life in the relative cool of the evenings for passagiato and al fresco living. Gardening is limited to early and late - avoiding the midday sun - with evenings spent watering the fruit trees, as the sun goes down an 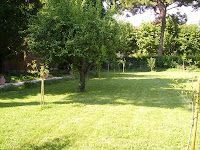 The nespola harvest is over, and for the first time I've actually found a use for the things - in the past, I've generally found them slightly sour, if they had any discernible flavour at all; one of the nespola trees we've inherited, though, produces fruit of a remarkable sweetness and succulence, and I picked bushels of the things during the short fruiting season. Excellent, baked in a tart over a frangipane base. One of the plum trees is also already finished - the one that produces quite small fruit, with red and yellow skins (perfect when combined with walnuts, brown sugar and cinnamon) - and the other one, with much larger fruit, is heavy with plums that should probably be picked next week. Ditto, the apricot and greengage trees, and after that quinces, and then industrial quantities of apples and pears. Despite their unfortunate leaf-curl earlier in the year, the peach trees are delivering quite well, and even the white peach, which we transpla 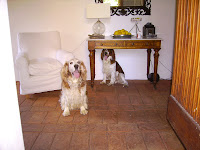 nted from the garden in Via Fucini at quite the wrong time of year, produced a solitary (but perfect) offering, which we solemnly shared between us a few days ago. The fruit from that tree is quite simply the most delicious imaginable...

The midday bells are ringing out from San Francesco, which has roused the four-footeds from their normal (for now) state of general drowsiness.

Tagliatelle, with a sauce of Celery & Tomato.