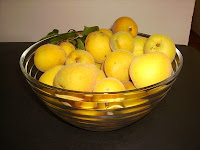 ...is in! Each one practically the size of a tennis ball, I was expecting them to be watery and tasteless - but, in fact, they have a wonderful flavour, almost more like peaches than apricots. I've probably never eaten apricots straight from the tree before now ( I don't remember....perhaps once, many years ago, which might explain why I always expect them to be delicious, and they generally disappoint). The ones which are available commercially tend to be picked while still hard, I suspect, so that they won't bruise in transport, and so have no flavour whatsoever, even though they look so inviting.

I was so surprised by their peach-like quality thatI researched peach-apricot hybrids. Jan 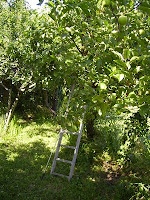 e Grigson says of 'Peach Apricots' that she understands them to be the acme of the apricot family...but, then again, pêches apricots in fact appears to be the term the french use for a standard yellow peach... so I'm unclear what exactly she was talking about. There are all sorts of peach-apricot hybrids in production, but the pictures I've seen all show them to have a smooth skin, more like a nectarine, whilst ours have a definitely fuzzy exterior.

We have two apricot trees in the old orchard, which, when we arrived last year, were oozing large quantities of a gelatinous substance from wounds at the base of their trunks. "Oh, those have had it," we were confidently informed by an authoritative source. "You'll have to get rid of them". Fortunately, Signor Tempestini took a more relaxed view: "E gommosa..." he said, and handed over some blue powder that had 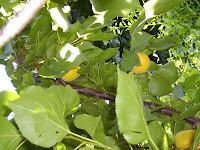 to be mixed with water and painted onto the affected areas. Two coats and several months later, and all was well.

Delicious on their own, they sit in a bowl on the kitchen counter, and those which escape the depredations of passing locusts in the course of the day have so far been used in bavarois, strudel, sorbet, and tarts. I had researched how to oven-dry the ones which wouldn't get used immediately, so as not to lose them - but I realise now that there's little danger of that happening.

Fiorentina, with rocket and parmesan.

Pear Soufflés
Posted by Pomiane at 08:34