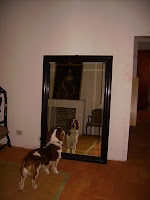 Effectively. Or, at least the move from the Ground Floor of the old house, completion on the sale of which happened on Thursday. The 'completion' meeting seemed to me very long and somewhat fraught, involving strained tempers on a number of fronts (the buyers got restrainedly shirty with their agent, as did we with ours, and the Notary was a bit surprised when the Technical Department starting re-drafting chunks of the contract of sale, even as we all sat there). I didn't follow a lot of it, as I was succumbing to a lousy head-cold, and just wished we could sign the bloody thing and then all go home.

In the ten days beforehand, we moved everything - and I mean everything - ourselves to Santa Caterina. The idea had always been that the more difficult pieces would be left to professional removers, but as we shifted more and more stuff, the amount left 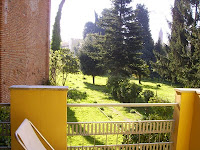 seemed a sillier and sillier proposition...and so we ended up doing the whole lot. Anything which wouldn't fit in the car (even with the back door left open, and driving very slowly the length of Martyrs' Square) went onto a hand trolley that we filched from the Brazilians...including the occasional portrait, a very large fridge, and some enormous mirrors, the process of moving which left me a nervous wreck (I have a phobia about moving large fragile things - just like having a fear of heights is 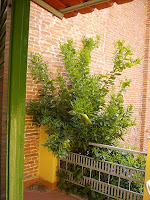 about worrying that you'll throw yourself off, so I know as soon as I come anywhere near large sheets of glass or mirror, or even a heavy pile of expensive porcelain, that the stuff is doomed...)

Menu planning went largely to pot during the removal period, and even where I did think of a menu for a particular dinner, in practice necessity often became the mother of invention as I realised at the eleventh hour that some vital ingredient was still in the kitchen in the old house - so, the dried fruit in Budino Toscano gave way to dried strawberries (and it became a ricotta and strawberry cheesecake instead), and I had to devise a completely new version of pissaladiere nicoise in the absence of both anchovies and olives, and so got creative with dried thyme and emmental as a replacement.

The weather is now beautiful. Although Spring has only just formally got underway, 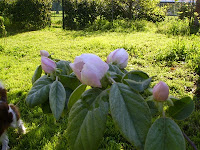 we now have the clear skies and sunshine of full summer. All of the citrus trees are throwing out industrial quantities of new leaf (and flowerbuds, in the case of the sweet orange), the lilacs are heavily in bloom, and the azaleas are just starting to flower. Unfortunately, the weeds are flourishing just as well as the flowers....which now consigns me to an afternoon clearing out the strawberry and raspberry beds, before we erect the fruit cage, later in the week...

Fillet of Salmon in Lardon Sauce, on a bed of braised Endive.