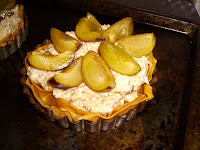 Finally, I've come up with a version of this recipe which works as I want it to!
Initially, the idea of walnut cakes with a fruit topping came from Roger Vergé - either apple or prune were his fruits of choice in the original recipe, but since I happened to have fresh plums to hand, the substitution was a no-brainer. Try as I might, and with whatever tweaks I thought might make a difference, I couldn't get Vergé's recipe to produce anything other than a flat and rather leathery result, rather than the light and delicious version that I had in mind. In the end, I gave up entirely on the proportions of his ingredients, and instead followed a standard Bakewell Tart method, but with walnuts in place of almonds. Success! A light cake base, with a beguiling flavour which lingers deliciously. Obviously, the fruit you use can vary widely - pear, apricot, peach, apple ...all would work equally as well.
For two.
Ingredients: 75g Butter, at room temperature; 75g Sugar (or equivalent volume Splenda); 75g Walnut pieces; 1 Egg; 2 sheets of Phyllo pastry, each 12" x 6"; 15g melted Butter; 1 tbs slivered Almonds; 17g Flour; four small plums, each stoned and cut into eight segments.
Method:
1. Brush Phyllo with melted Butter; cut each sheet into two squares and make two double layer tart shells in greased individual tart rings, sprinkling the slivered Almonds between the two Phyllo layers in each shell. (For full method see here.) Bake for five minutes or so in a 200 degree C oven. Remove from the oven, and reduce the temperature to 180 degrees C.
2. Cream the remaining Butter in a bowl with the Sugar (or Splenda); process the Walnuts to a fine powder and fold these into the mixture, then stir in the beaten Egg and fold in the Flour.
3. Divide the mixture between the two Phyllo shells, then arrange the Plum segments over the top. Bake twenty minutes in the 180 degree oven, then sprinkle with icing sugar and bake a further ten minutes. Allow to cool down, and serve while still warm.
Posted by Pomiane at 11:06