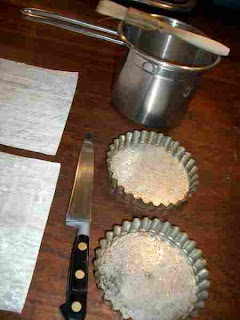 Several years ago I discovered the huge range of possibilities that result from making pastry shells from Phyllo, rather than from either shortcrust or Pate Sucre. The end result is both light and entirely reliable, as well as being supremely dietarily sound. As a matter of course these days, any recipe I come across that calls for pastry of any kind, I automatically transcribe to be usable with phyllo. The following is the basic process I follow. This is to make two pastry shells; for more shells, simply multiply the ingredients pro rata. 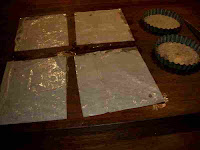 2. Use the melted Butter to brush two sheets of Phyllo, each one approximately 12" x 6". With a sharp knife, then cut each rectangle into two squares.

3. Place one square of Phyllo buttered-side-up over the rim of a false-bottomed tin and gently ease it into the tin, being careful n 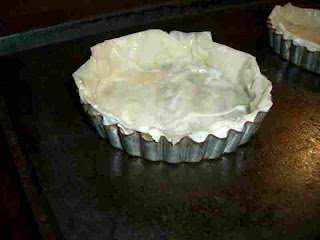 ot to tear it. Then work your way round the tin, folding the edges of the pastry over to make as neat an edge as you can, as close to the actual shape of the tin as possible. Once one square has been folded in this way, take a second square and repeat the process as a second layer on top of the first one. When you have completed this with all tins, use any leftover melted butter to brush the inside of the uncooked Pastry shells.

4. I used to put weights into the shells at this point, as one would for blind baking a shortcrust shell, but have discovered that with phyllo it really isn't necessary. Normally, I scatter some slivered almonds over the bottom layer of phyllo, and before I put the second layer on top - which both gives added crispness and flavour to the finished shell, but also seems to help to stick the two layers together during cooking, and stops any unwelcome air bubbles from manifesting themselves. 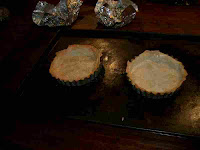 ated oven and bake for approximately five minutes. Remove from the oven when the visible edges of the shells appear to be going brown. Remove the foil and the weights, and return the shells to the oven for an additional five minutes or so.

6. Once the shells are properly brown, remove from the oven, and use therafter as your recipe requires. 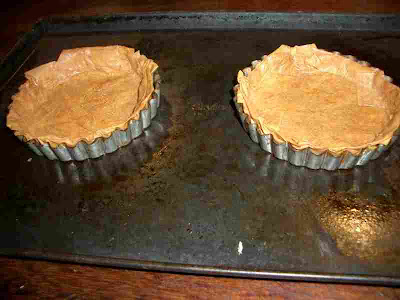