Hand-made cumbrian fudge, from The Toffee Shop in Penrith. Wonderful stuff...we dished out boxes of it as stocking-filler presents at Christmas, several years ago, and it has been spoken of ever since in awed tones by the various recipients. Last time we were in London, we stocked up on supplies (from the traiteur on Chelsea Green, who sometimes carries it) to have on-hand as gifts when going to dinner parties in Pisa. Which was why we happened to have some lying around last week, which the Technical Department thought might be just the right sort of thing to give as an offering to the octagenarian Monsignor who is our new landlord for the storage lock-up in Via Sant'Andrea which we've just leased.

We'd gone along to his den last Monday, to sign the rental contract, on which occasion the Monsignor had sat, on a large ecclesiastical throne, through the entire proceeding readin

g 'Oggi' magazine, and every so often pointing out interesting articles to his one-armed (and almost octagenarian himself) major domo - seated at his right hand, on a smaller ecclesiastical throne - who'd been deputed to deal with the practicalities of the matter. The Monsignor seemed a jolly old cove, generally delighted with life, and inclined to make long and rambling jokes, the point of which were way out of our reach - but it seemed polite to laugh anyway, and the whole affair was jovial all round.
So, when he telephoned later in the week to say that the registered copy of the contract was available for us to collect (he managed to drop the phone in the process, and then pressed the wrong buttons on his phone console, so that after he thought he'd finished the phone call he could be heard

for several minutes afterwards saying querulously to somebody else that he thought he'd done something wrong as the phone didn't seem to work any more) the TD suggested we take him a box of fudge as a gesture of goodwill. With surprising results.
Since the Contessa hasn't yet favoured us with a response to our offer re renting her Palazzo on the lungarno, we thought we'd ask, in passing, if the church had any property that might be appropriate for us to rent instead. The initial answer was a regretful 'no', that all of their property was spoken for...which turned perceptibly into a 'but, then again, maybe', after presentation of the box of fudge.

And the 'but, then again, maybe' turned out to be a fourteenth century farmhouse nestled u 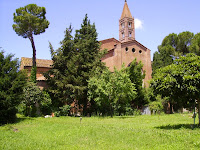 nder the eaves of the church of Santa Catarina, with beams and exposed medieval brickwork and the whole nine yards....oh, and a couple of acres of garden, looking out onto fields beyond, and not another house in sight. And all within the middle of the Centro Storico, five minutes walk from the leaning tower...

Pinching ourselves in disbelief, we've come back to London, leaving Massimo to work his magic on contract negotiations. It's tempting fate to say more about it before the ink is dry on the paper, so I won't...

Smoked salmon tiède, on a soubise of onion & basil

Peach tarts (made with white peaches from the garden - incomparable!)
Posted by Pomiane at 07:48

Fingers crossed for you here in Buckinghamshire. I'll say no more in case it tempts fate.

I will now be anxiously awaiting your next posting...