How to make Puff Pastry... 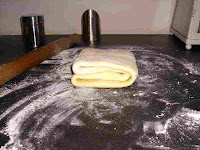 After an initial disaster or two, many years ago, I gave up on making puff pastry, and pretended (to myself) that the commercially-made alternative was good enough. Which it isn't. At the first bite, the flavour of home-made puff pastry is immeasurably better than any commercial product - and although it involves a few stages in production, the aggregate time it takes to make a batch is no more than twenty minutes or so. Good to do in tandem with some other mundane garden or household task from which you'll happily take an enforced break once every hour!

I can't remember now what it was that went wrong with my early efforts - although I suspect it was because I was trying to go the purist route, and use the block of butter in one large lump, which is pretty challenging for the uninitiated. If you get the temperature of the butter wrong, you just end up with a sticky mess that gets wrapped around the rolling pin and tries to attach itself to all available surfaces within reach. Quite probably, including the ceiling.

The method I use is adapted from Gaston Le Nôtre, who is to be trusted implicitly in all matters pâtisserie. His method for choux pastry is equally straightforward and completely foolproof. I disagree with him, though, when he says that this puff pastry needs to be used on the day it is made - in practice, it's fine in the fridge for three or four days afterwards, and any off-cuts can perfectly safely be frozen for future use. 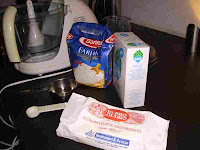 To make sufficient pastry for one large double crust pie, or half a dozen or so individual pastries:

Ingredients: 2 cups '00' Flour (you don't have to use '00' - ordinary 'Plain Flour' would work, too, but '00'is lighter and has a distinctively good flavour...whereas Plain Flour is just...flavourless Plain Flour); 130g Butter, at room temperature; 1.5 tsp Salt; 0.5 cup cold Water; 130g Butter, fridge-chilled and cut into small pieces. 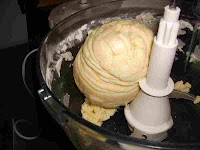 1. Process all of the ingredients apart from the chilled Butter for a minute or so,until they form a homogenous ball within the bowlof the processor. Wrap in cling-film and refrigerate for an hour. 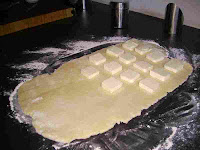 oured work surface, roll the ball of pastry into a strip approximately 18" x 6". On two thirds of this strip of pastry, place the pieces of chilled Butter. 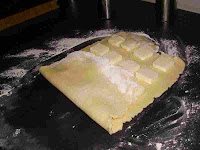 the Butter pieces are contained within an 'envelope' of pastry.

4. Turn the pastry so that one of the open ends of the roll is facing you, and roll it - gently pressing down with the rolling pin as yo 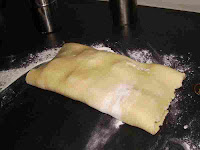 u do so, to flatten the Butter inside the pastry - into a strip about 16" in length.

5. Fold both ends of the strip towards the middle,and then fold these once more into themselves. Turn the 'package' through ninety degrees, and repeat the rolling and folding process. Refrigerate the folded 'packa 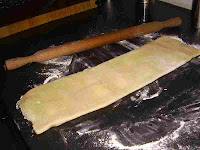 6. After an hour, repeat the rolling, folding and turning process twice more, and refrigerate. 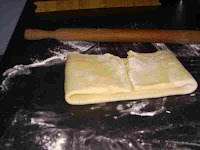 7. After another hour, roll and fold the pastry twice more (making it six times in total, with two one-hour breaks in between for it to rest and re-chill).

The pastry is now ready to be used.