...has died. And of all the places to learn of it, the fact that it was on the obituary page in last week's Economist magazine indicates just what a tour de force he became in his lifetime in the world of food. I hadn't particularly realised the stature of the man - until quite recently - and for many years he was no more than the face on the front of my battered copy of 'Desserts & Pastries' which has been the source of many good recipes and very reliable techniques over the past twenty five years or so. I think he's cur

rently out of print - which is quite scandalous, when you consider the towering piles of second rate 'celebrity chef' tat available in bookshops the length and breadth of the land - and when I just checked on Amazon, the sort of prices being asked for second hand copies of his various books quite took my breath away.

In some respects, the Economist obituary got him absolutely spot-on: pâtisserie is about precision, and his explanations for making all different kinds of pastries and doughs are clear, concise ... and they work! And not in the ho-hum Delia Smith I-suppose-it-will-do way of 'working', but they are light and delicious and positivel 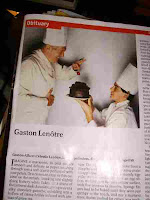 y ambrosial. There were other aspects of the obituary which I think must have had him turning in his grave, though - a reference to using 'a cupful' of sugar, for example, instead of a specific measurement by weight would not have gone down well with Monsieur L...and I suspect he would have thought it rather sloppy to talk of eating Galette des Rois on January 8th, when any self-respecting frenchman knows that it is traditionally served on the Sunday closest to January 6th. January 8th this year was a Thursday... Yes, I knowI'm being a pedant, but it's that kind of pedantry which is necessary in good baking and which formed the underpinning to Lenôtre's entire approach to cooking.

Slightly eerily, although I only just came across his obituary, it was actually on January 8th that he died...which was the same day on which I served Pear & Almond Tarts for dessert, following his excellent recipe, and wondered aloud to the Technical Dept whether Lenôtre could still be alive "since he must be about 89, by now". In fact, he was 88 at the time of his passing. The World is a richer place for his having been around.

Cointreau-flavoured panna cotta (I'm out of Limoncello in London, and Cointreau is a delicious alternative)
Posted by Pomiane at 10:32