....by which I don't mean the Queen-Victoria-we-are-not-amused or the Mrs-Thatcher-we-are-a grandmother type of 'we' - just straightforward common-or-garden first person plural 'we'. Both the Technical Department and I have been stricken; which, in a two-person household, is a pretty thorough epidemic. He started first, as we were leaving London at six o'clock on Tuesday morning, to drive the four-footeds down to Italy... and by the time we'd shared the confines of a packed car for the two day trip, the germs had had ample opportunity to get their claws into me as well. I have to say, having subsequently discovered quite how grim this bug is, it was truly heroic that

TD struggled with it for the entire journey, including the snow and ice on the approach to Mont Blanc ...through all of which the four-footeds maintained their usual air of sang-froid, and took the whole experience entirely in their stride.
It's a thoroughly nasty virus - bone-achingly debilitating, where a sneeze or cough can leave the system racked with pain for several minutes afterwards, and deep lassitude is the order of the day. Bolstered by industrial quantities of Sudafed, we're trying to plough on as much as normal as is possible...but with each of us having to stop very regularly for a quiet sit-down after doing something as strenuous as - for example - having a shower, or emptying the dishwasher. 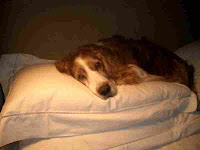 The four-footeds are sensitive that all isn't as it should be, and they're being very good about curling up companianably at one's feet for hours on end...but then they still have to be taken out regularly in the course of the day, which probably doesn't greatly help the recovery process. Oh, well...

Of course, we're both significantly over the worst. If we weren't, then I wouldn't be sitting and writing this right now...

There's a gap in the recipe book market, though: menus for cooks who are distinctly under the weather. I'm not sure what circumstances short of fire or flood would justify in the Technical Dept's eyes the idea that we might not have three courses for dinner...actually, thinking about it, there aren't any circumstances which would justify such a drop in standards, I suspect. Truly, The End Of Civilisation As We Know It. So, in the past few days, I've been dredging my memory for the least physically demanding recipes I can think of...Pears in Butterscotch-Marsala Cream (two minutes prep and forty minutes in the

oven); spit roast chicken (no prep, just light the grill and carve at the appropriate time); hasselback potatoes (peel, slice, roast); carrots in Marsala (alcohol carries a lot of the burden when there's been only limited human input, I find). Jamie, Nigella, Gordon....where are you? There's money to be made!

Enough. I need to go and have a quiet sit-down.

Chicken in a parsley-flavoured veloute( I was going to make a pie, but haven't got the energy); Fagiolini.

Andalusian Tarts.
Posted by Pomiane at 18:19