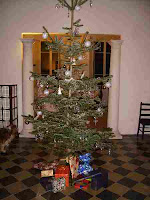 And not a moment too soon, having just lost an entire week to flu-induced dozing beside the fire, and in using all available energy merely in getting through the day. The Christmas Tree was eventually installed in the Library - where it had spent three days leaning disconsolately against a wall, whilst neither of us could get our heads round the idea of c 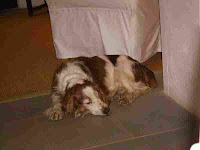 limbing on ladders and dealing with fiddly little glass ornaments...and, as it was, the Technical Department nearly succumbed to vertigo as he fixed the top-knot to the three-metre extremity... and all things considered it was a bit of a close-run thing.

That done, it was possible to turn our attention to the real Christmas agenda, which this year is Bruno Loubet. Working through as many items as possible in 'Cuisine Courante' t 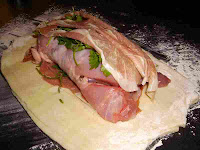 hat haven't yet been tried (as well as some that have, but which merit a seasonal re-visit). The main attraction for Christmas Dinner was a rabbit en croute, which in fact was an adaptation from a Loubet recipe rather than a faithful rendition of his version. I expect I'll blog the recipe in full later on, but essentially, it comprises a whole rabbit, boned, and then rolled up, having been seasoned with green peppercorns and slivers of sun-dried tomato, along with a generous dribble of white-truffle oil; some layers of chopped parsley and a wrapping of prosciutto, and then the whole thing is encased in puff pastry and baked for forty minutes or so. Seriously delicious, both at t 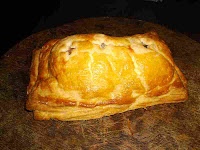 he time, and when served cold as leftovers the next day.

Fortunately, Christmas here extends over several weeks, as the Italians only finish the holiday period at Ebufana, on January 6th, and the period in between is like an extension of Sundays, one day after another. Town meanders along at half-speed, and there's a generally relaxed air to the place. Which means there's plenty of opportunity to work our way well and truly through the recipe list between now and Twelfth Night. 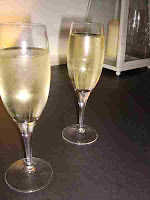 Pan-fried Brioche and Pear with Ginger.
Posted by Pomiane at 14:19