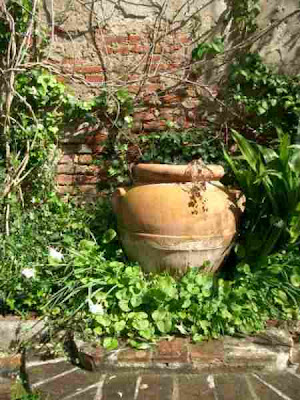 While global warming and climate change meant an Easter weekend of flooding and blizzards in the UK..... in Tuscany, instead, we've had the early and unexpected arrival of summer! Very unexpected, since it isn't even the end of March, and already today the french windows were left wide open for much of the day, as gloriously warm sunshine streamed in, and shirtsleeves were in order for some heavy-duty garden work. Many of the spring bulbs are in a state of shock, as they've been politely following the dictates of a more normal weather progression, and have been behaving until now as though it should be jacket-and-scarf weather here for at least another month......(a little like the Italians themselves, who tend to keep strictly wrapped up until after May 1st, 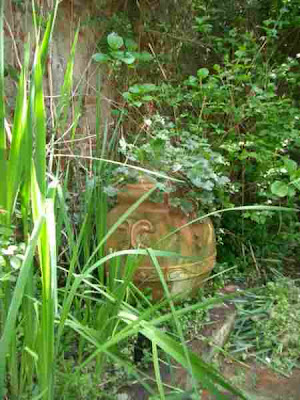 just in case....by which time groups of German tourists have already long been visible in the streets of Pisa, sporting shorts and open-toed sandals).

With the arrival of summer, the town immediately begins to smell differently. No, not the scent of flowers coming into bloom, but the wonderfully nose-twitching smell of good coffee. At the first indication of warm weather, all the cafés set chairs and tables out, outside their premises, and throw open their doors to let the mingled smells of coffee and pastr

ies escape into the great outdoors...And in general people slow their pace - even if they aren't actually stopping to sit at a café table to luxuriate in cappuccino and morning sunshine - and there's an immediate tendency to 'stroll' rather than 'walk' , in order just to enjoy the beauty of the day and the town and the sense of being alive.

It was in the course of strolling rather than walking that I registered the presence of a new stall in the market. Cheese, salami, and honey. The sort of thing that makes a regular appearance in the monthly mercato di contadini in Piazza Cairoli, but which I've always assume

d wouldn't drum up enough custom to make sense of a daily pitch in the normal everyday market in Via Cavalca. But this chap obviously thought otherwise, since I remembered I had actually seen him when last we were in town, several weeks ago - at which point it had still been bracingly cold, and so I was very definitely head-down not strolling, and making my way at speed directly towards Antonella's stall, round the corner....

This time, I stopped. And looked. Truckles of promisingly ancient-seeming pecorino, and baskets laden with different kinds of home-made salami, prominent amongst which were fennel, and wild boar. In a small vitrina he had some of his own gorgonzola, which looked intriguing, and several different kinds of home-produced honey. All looked worth a try, and in the

end I opted for a chunk of pecorino and some fennel salami. Which is the point where - in true down-amongst-the-simple-folk style - I should be able to add that I handed him a few small coins in exchange for his honest wares...... but forget it, this is the twenty first century and this sort of stuff doesn't come cheap! With negligible change from a sizable banknote, I headed home quickly before I could be tempted further.

The pecorino was excellent, though - aged and crumbly, with the sedimentary texture of old Gouda, and an agreeably edgy flavour: quite complex but not too aggressive.

I felt well-set up for several hours of garden-work thereafter: hacking, and slashing, and weeding, an 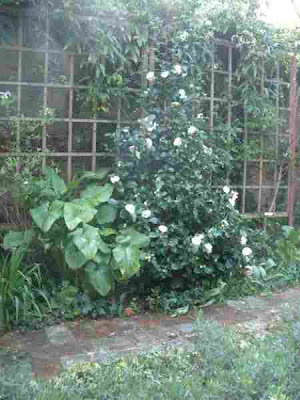 d planting, and even a spot of Gladstonian labours (tree-felling, I mean, as opposed to rescuing fallen women, as he'd have us believe he was doing at the time). All good healthy stuff - except that I undid any benefit to my system by immediately wolfing down industrial quantities of a version of fruitcake I'd made the day before, using some mincemeat left over from Christmas as well as rather a lot of Demerara sugar. Deceptively light - which meant that it all disappeared much more quickly than intended.....

Which, actually, is also what happened to the pecorino, come to think of it. Ah well....tomorrow is another day. And, with any luck, summer will still be with us.....