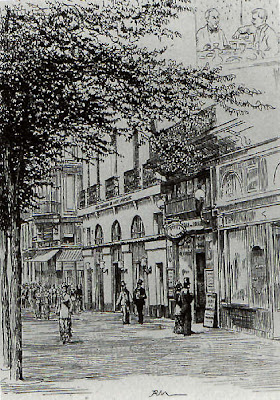 Founded in 1815, on the corner of Rue Gramont and the Boulevard des Italiens, the original Café Anglais was one of the restaurant high-spots of nineteenth century Paris. Probably its most famous moment was the so-called 'Dinner of the Three Emperors' in June 1867, when Chef Adolphe Dugléré served up a sixteen course repast for a cozy tête-à-tête between the Emperor of Russia, the Tsarevitch, the King of Prussia, and Bismarck. A cheerful little gathering, no doubt. I couldn't help but note that the twelfth dish on the menu was Ortolans, the traditional method for eating which involves placing a napkin over one's head (don't ask me why), and chewing the undrawn birds whole - with only the beak left sticking out of the diner's mouth - for the duration of fifteen minutes! Quite apart from the

dubious culinary and ethical aspects of the process, the image conjured up of this particular occasion is fairly surreal: several crowned heads of Europe, napkins akimbo, and no sound for a quarter of an hour but that of tortured chewing, and all while trying to breathe at the same time....

Predominantly a series of private dining rooms of varying scale and grandeur, the C

afé Anglais boasted the largest and most splendid private room in Paris at that period, 'Le Grand Seize', the paneling from which can still be seen at Le Tour d'Argent, along with the dinner service on which their imperial majesties dined in 1867. When, in 1913, the owner of the Tour d'Argent married the daughter of the owner of the Café Anglais, she brought

with her not only those particular chattels, but also the remnants of the Café Anglais cellar, which seems not a bad deal at all. Particularly when you consider that the wines listed at the dinner in 1867 included a Madeira from 1812, and a Château Margaux and a Château d'Yquem both from 1847.....for the sake of any or all of which I'd quite happily sit, looking ridiculous, with a napkin on my head for the space of fifteen minutes! Longer, even, come to think of it.....

ally correct, but these days practically as noteworthy in the gastronomic firmament, is the fact that the eponymous heroine of Babette's Feast, was described by the author as having worked at the Café Anglais and of having learned her trade at the apron strings of Monsieur Dugléré. For all those many, many people (me included) who have tried to replicate the feast, that little snippet would definitely have some kind of frisson - although I think that when we did it, we could have done with a little of the dowry assistance, as well, as we had to slip an entire century in the choice of vintage of Clos de Vougeot!

And so, what might Monsieur Dugléré make of the modern incarnation of the Café Anglai

s? I imagine he'd be pretty impressed by the kitchen set-up, and blown away by the prices (he was selling, not buying, after all) ; the menu, he would probably find completely incomprehensible - significantly the result of changing tastes and fashions, I suppose - but I fear his opinion of the general level of skill and experience in the kitchen would be quite unprintable. Woefully basic, for the most part......and I wonder if any of the modern kitchen crew would have achieved even bottle-washing status in the Dugléré kingdom...

I've no idea where the Dugléré family plot might be, but I suspect that wherever it is local seismologists should take note. I suspect he's down there, spinning at a rate of knots!

Posset of Apricots and Marsala.
Posted by Pomiane at 10:14

We love your story on the Cafe Anglais, which we found while preparing an article for our website www.Gadaboutparis.com

Would you be interested in allowing us to publish it on our website, with full credits and a link back to your blog?

Of course - glad you liked it.

just watched babette's feast and was doing a little reading. thanks for the informative post!

Of course, Cafe Anglais was the site where Swann met Odette for their first "night of cattleyas" in Swann's Way. Apparently, few are reading Proust these days.

True. Although, she had actually dined at Maison Doree, because she hadn't been able to find a table at Prevost's, where they'd been supposed to meet...
It must be nearly thirty years since I read it (yes, I did go and check - I didn't have all those details printed on my brain!). Maybe it's time to set aside a clear month to re-read...?