......and before you know it, you're wondering where half the afternoon has gone!

e middle of Six Degrees of Separation, or else caught up in a game of Chinese Whispers! For a start, when I was surfing for information on Ben Ryé the other day, I came across references to a Praline Ben Ryé which had been designed (if that's what you do to a chocolate) by 'world-famous chocolatier' Paul de Bondt.

Except that I don't really think of him as that, but rather as the jolly dutchman that we encountered at one of the first Eurochocolate festivals in Perugia in

1998, when he was using one of our chocolate-tempering machines as part of a chocolate demonstration......Depending on who you speak to, apparently he's now generally considered to be one of the top ten, if not one of the top eight chocolatiers in the entire World.......

And as though that isn't enough, he turned out by chance to be based in 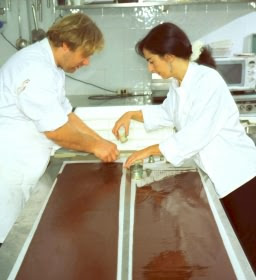 Pisa, where we fell across his shop several years ago, nestling in a back street not far from the station (although he's just moved to much more prestigious premises on the Lungarno, just along from the Victoria Hotel). He and his wife have a workshop, it appears, in Gello, which is an eminently unremarkable conurbation on the outskirts of Pisa, on the flatland that runs between us and the Monte Pisano. I'll think of the place with renewed respect, now that I know it is home to something other than merely the pizzeria belonging to Paolo Pirelli, Massimo's father-in-law......

wallowed indulgently through all of that, I was tempted to go and see what the Donnafugata website had to say about it all.........and that was my downfall! At that point, my afternoon was completely shot! Splendid website, bursting with intriguing comments, and detail, and images, and information......and a page of recipes to accompany their best wines.....I loved their explanation that the woman's head that seductively graces every bottle from the estate is in fact that of Maria Carolina, Queen of the Two Sicilies - when I'd taken it for granted all along that it was supposed to be Claudia Cardinale, from the 1963 film of The Leopard! I can't speak too highly of either the wine or the website - both are well worth sampling for yourselves...And the website at least is only a click away, at www.donnafugata.it Highly recommended ....as long as you're not short of time, that is......

Supremes de Volailles with Archduke Sauce, on a bed of Spinach

You have my curiosity piqued about the smoked salmon and celery timbales. If you need an idea for another post....:-)