......of rampant rubber-necking. My godson has been visiting, and since this is his first time in Italy, there was much ground to cover. On Friday, we did the 'obvious' bits of Pisa: Sinopia Museum - where the air conditioning was unusually sub-standard, but the drawings never disappoint; Camposanto , to see the Buffalmacca frescoes, gloriously gruesome in some places, and merely glorious in others; the Baptistery, to test the echo; the Duomo, for the body of San Ranieri ; and then the entire Museo del Opera del Duomo, which we had completely and wonderfully to ourselves. By the time we'd finished

and were hanging over the railings of the upper cloister in the Museo, the crowds in the street had thinned, and the sun was going down behind the City Ramparts, bathing the buildings of the Campo di Miracoli in soft evening light. Although Frederic was keen to go up the Leaning Tower, the powers that be - since he's only sixteen - wouldn't let him go alone ( old enough to be killed for his country, but not old enough to go up the Tower of Pisa unaccompanied. Go figure...) and I explained to him that wild horses wouldn't drag me up there. I have an intellectually-informed caution concerning direct exposure to altitude; Frederic , with the refreshing candour of youth translates this into being 'scared of heights'. I pointed out to him that he was lucky he wasn't under twelve, in which case not only would he have to be accompanied, but he'd be required at all times to hold the hand of the accompanying adult. He looked more than a little appalled at the prospect.....

Saturday: to Florence, with a crack-of-dawn start, walking through the empty streets of Pisa to get to the station for something that wasn't quite the milk train, but felt like it could have been. Just time for a cappuccino and a croissant alla crema at the station buffet before we got on the train, and then

mile after mile of dull, flat landscape until we hit the hills just before Florence itself. Then........culture! Santa Maria Novella (Tornabuoni Chapel; Strozzi Chapel; Giotto; Masaccio; Spanish Chapel; Uccello Cloisters), then past San Lorenzo (still closed for the holidays) en route to the Medici Chapel (only seven minutes each......it was clear that the uniformed gauleiterein on duty wasn't having a good day), then a dash through the Duomo, just to look

at the wall-painting of John Hawkwood, before we got to the Bargello. My stomach was rumbling by that stage, so it was deemed appropriate to have a pit stop for a last cappuccino of the morning (can't have cappuccino after 11.00 .......) and a frittata panino. Advice to Godson: Never do art on an empty stomach; rumbling interferes with the concentration. Advice solemnly received by Godson and by attendant small birds that were waiting for us 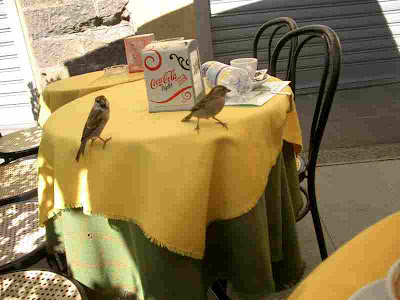 to vacate the table so they could pick at the crumbs......

After the Bargello, and before lunch, we squeezed in a trip round the Palazzo Vecchio, and managed to correct a group of Australians behind us in the queue who were trying to decide whether or not this was where the 'David' was housed. On being told it wasn't, they disappeared; I'm not sure who felt most that the exchange of information had a happy outcome.......

Was at Camillo, near the Trinita Bridge. My companion had carpaccio of salmon, and I had blow-torched pecorino doused in balsamic vinegar, and then we both had coniglio desossato which was chopped up and fried in batter. I believe raspberry tart was then consumed on his side of the table, but by that stage I'd lost interest - although I was informed that the tart was pretty good stuff. A carafe of house-white significantly dampened the cultural hunger for the afternoon, and our efforts were restricted to a desultory examination of the outside of the Pitti Palace, before a wander through town and a jaundiced eye was cast over Ghiberti's Doors of Paradise en route back to the station. We finally whiled away the end of the afternoon, killing time before our train, in a cafe in Piazza Santa Maria Novella, merely sitting in the sunshine and basking. Exhausting stuff.....

.....to the extent that nobody in the household roused themselves on Sunday morning before 11.00, and the day was gently shot as a result. Except that the Technical Department volunteered to do companion duty and go up the Leaning Tower at the end of the afternoon - where I was interested to learn afterwards that he also discovered an intellectually-informed degree of caution towards exposed altitudes, somewhere between the bells and the final storey of the Tower. Needless to say, the human young were skipping around the structure as though they were part of that photograph that everybody knows of a group of builders eating their sandwiches whilst balanced on a girder seventy stories above the New York skyline, sometime in the twenties.....Strange, isn't it, that he can do that with no fear whatsoever - whilst the threat of having to hold somebody's hand represents untold horror......

Tarts of Fegatini and Mushrooms, in a Marsala Cream.

Zabaglione.
Posted by Pomiane at 07:05